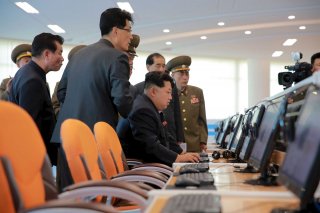 North Korea is not exactly known as a prominent producer of consumer electronics, compared with its neighbor to the south, which gave the world LG and Samsung. But the country, per a new report, has introduced a new tablet computer called the Naenara 101.

NK News, citing a domestic media report by Pyongyang Sinmun which was itself touted in a Facebook page by Russia’s embassy in Pyongyang, showed the introduction of the tablet, which is called the Naenara 101. The name translates to “My Country 101.”

The new tablet, per the report, boasts a 10.1-inch screen, a pair of SIM card slots, and can connect to both a mobile network and North Korea’s public wireless network.

“With the help of the third generation mobile data transmission system (3 G) and the Mira network, at any time and anywhere, the user has various information services: for example, he can read the latest issue of the newspaper ′Nodon Synmun,” the Russian Facebook page said. “Technical and artistic literature from the state internal network, to learn the weather forecast, to scroll through video files on the subject of interest.”

As 5G begins to roll out in the U.S. and other parts of the Western world, North Korea is believed to have a wireless network that’s the equivalent of 3G.

The Naenara 101 is not the first tablet computer to be available in North Korea. 38 North reported in 2013 that a product called the Samjiyon tablet computer had appeared in that country, about three years after the launch of Apple’s first iPad.

The author of that post was able to obtain the Samjiyon tablet on a visit to North Korea, and noted that a product like that is out of the reach of most ordinary North Koreans.

“Most North Koreans are worried about food and heating, not about electronic gadgets,” the report said. “But, just as there are now more than 2 million mobile phones in North Korea, the Samjiyon tablets exist and highlight one facet of this increasingly diverse society.”

That tablet came with an antenna that could receive TV broadcasts, although it did not appear to offer a native way to connect to the Internet. It could reach the country’s intranet, however.

A 2018 report by North Korea Tech cited a Korean Central Television expose that went inside the assembly line at Potonggang Electronics, where LCD TV components are assembled. The factory makes computer products and USB memory sticks, too.

“The video shows workers testing LCD TV components, putting parts together to make TV sets and testing the final TVs but at no point does it back up its main claim that the curved LCD panels are made in North Korea,” the report said.