A New North Korea in the Era of 'Trumplomacy' 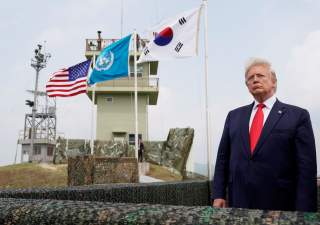 Conventional wisdom holds that long negotiations must always precede summits between heads of state or government. Working-level teams hash out agreements in details for weeks, months, and sometimes even years before the summits where country leaders provide little more than their blessing to already-concluded texts.

But we don’t live in conventional times and President Donald Trump isn’t a conventional leader. After walking to the brink of war with North Korea, Trump in the context of an emerging inter-Korean dialogue Trump agreed to meet Kim Jong-un, the North Korean leader. The Trump-Kim summit-level meeting, which took place in Singapore in June 2018, was intended to jump-start talks to eliminate North Korea’s increasingly sophisticated nuclear-weapons program.

The summit did not lead to any breakthrough, however, and a follow-up summit in Hanoi in February 2019 between the two leaders also failed, leaving Pyongyang free to continue to expand and perfect its nuclear arsenal. Worryingly, in recent weeks signs of mounting tensions also began to flare up again: North Korea, for instance, conducted tests of short-range missiles.

So, when Trump decided to reach out to Kim last week to offer a short meeting at the Demilitarized Zone (DMZ) on the margins of his official visit to South Korea, the criticisms poured in. Why would the president seek yet another meeting with Kim? What could this possibly accomplish, except the further legitimization of Kim’s rule and of his country’s nuclear-armed status, a concession that no U.S. president before Trump had chosen to make? Trump’s decision to cross over the border into North Korea with Kim further infuriated his critics, who pointed out (rightly) that the president had nothing but praise for the North Korean dictator.

Yet while it is too early to make any predictions with any certainty, Trump’s handshake meeting with Kim may have been all that was needed to put the negotiating process back on track and finally achieve results. For that to happen, however, there are two requirements.

First, the process will need to be pushed down to the working-level, which means that the United States and North Korean negotiators will need to be given authority, time, and space to conclude an initial, detailed agreement in the lead-up to a third Trump-Kim summit, which is in the works. There were indications after the DMZ meeting that this may now be part of the new arrangement. In contrast, after Singapore and Hanoi, working-level negotiations ebbed and flowed but produced little of substance because the focus remained on summit diplomacy.

Second, and relatedly, the United States will need to abandon its longstanding (and vain) “denuclearization-first strategy” and embrace an incremental approach that sequences nuclear risk reduction/elimination efforts and building toward a peace regime on the Korean Peninsula. That means Washington will need to make concessions upfront and recognize that progress toward North Korea’s denuclearization begins with arms control. This, in effect, will require the United States to accept that North Korea will remain a nuclear-armed state for the foreseeable future. News reports indicate that momentum may be building inside the administration to promote such an approach, although some officials, notably National Security Advisor John Bolton, have already denied it.

This approach, of course, would be extremely challenging to execute and it would not be perfect, if anything because it would not put an end to North Korea’s nuclear-weapons program (at least not immediately). It would still constitute a win, however, because if done well it would finally begin to manage a problem that has for too long been left unaddressed and that has—as a consequence—gotten worse.

Could Trump’s unconventional methods get us there?