The Next Election Will Determine Donald Trump's North Korea Legacy 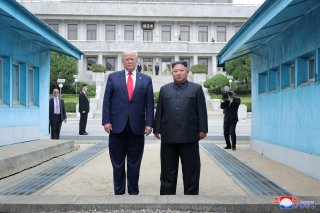 Let’s start with what happened in the Hanoi Summit. North Korea claims that it requested the lifting of five specific UN sanctions that were most damaging to their civilian economy in return for the dismantlement of the entire Yongbyon nuclear facility. There is a debate about whether or not this is a good enough concession, but it is meaningful that Pyongyang, for the first time, has offered the denuclearization of Yongbyon, the center of their nuclear program. Nuclear expert Siegfried Hecker, who has visited Yongbyon four times, said it is responsible for 70–80 percent of their nuclear capability. At the very least, it could have been the basis for some meaningful small deal in Hanoi, rather than simply a squandered historic opportunity.

Instead, Donald Trump allowed his national security advisor at the time, John Bolton, to collapse the negotiations with an all-or-nothing approach. The document Bolton gave Kim Jong-un was based on his “Libya model,” which Pyongyang has repeatedly rejected, called for complete, verifiable, and irreversible denuclearization as a precondition to any serious concessions from the United States. Why did Trump let this happen? It seems that Trump was more concerned that Michael Cohen was testifying during a congressional hearing taking place on the same day and did not want to lose more points in U.S. domestic politics by making any concessions to Pyongyang. Following the summit, he tweeted that the Cohen hearing may have contributed to his decision to walk away from the Hanoi Summit, blaming the Democrats for the collapse of the summit. In September, when Trump decided to fire Bolton, he slammed Bolton for making “some very big mistakes” with his "Libyan model" remark, setting back talks with North Korea. The buck stops anywhere but here.

There was also one more factor making the United States unwilling to lift sanctions. U.S. policymakers believe that they forced Kim to the negotiation table by imposing the crippling sanctions adopted in 2016–2017. Thus, they do not want to easily give away such effective leverage. However, it was under these sanctions, as well as harsh rhetoric and threats of war, that Kim was able to consolidate his political base and also conduct non-stop nuclear and missile tests. As long as China continues to trade with North Korea, the sanctions, though painful, are not enough to make any major change. It is possible that Kim actually came to the table out of confidence when he thinks he completed his nuclear and missile capabilities, not just from the pain of stifling sanctions. Furthermore, the momentum for negotiations was largely generated when South Korean president Moon Jae-in started diplomatic initiatives such as inviting North Korea to the PyeongChang Winter Olympics and conducting inter-Korean summit meetings. Through his mediation diplomacy, Moon may have convinced Kim that Washington and Pyongyang could reach a deal and that Trump was serious about negotiating. Neglecting these factors to focus merely on the economic sanctions is a big misjudgment.

Kim rode a train for sixty-six hours from Pyongyang through China to the Hanoi Summit, perhaps dreaming of North Korea making changes like China and Vietnam. But he had to ride the same train for those same hours back to Pyongyang, empty-handed and humiliated. Now he needs to worry about his legitimacy as a leader and the “audience cost” among his people for not winning anything even after offering Yongbyon. North Korean officials accused Bolton and Pompeo of “gangster-like” demands and also made harsh remarks about Moon and South Korea for failing as a mediator. But of course, who could easily predict what Trump would do?

Yet neither side wants to go back to the period of “fire and fury” or “Dotard vs. Little rocket man,” mostly because of the political investment they have put in the relationship. Both Trump and Kim still managed to score politically through these big events and both want to maintain diplomatic momentum as shown in the surprising DMZ summit of June 2019.  North Korea will likely refrain from major provocations such as nuclear or ICBM tests that would jeopardize the entire diplomatic investment, even if they engage in lower-level military activities to get some attention from Washington. But, fearing the risk of failure, Pyongyang will also act more carefully in the near future when engaging in major diplomatic initiatives like Hanoi. In the end, what will happen between the two countries really depends on U.S. domestic politics. North Korea will pay close attention to whether Trump is re-elected or leaves the White House next year. At this moment, with all the uncertainties of the coronavirus situation, it is difficult to answer this question.

Regardless, there are some clear lessons we should learn from the past. Trump’s unconventional top-down diplomacy, which bypassed the foreign policy establishment, at least resulted in building this unusual personal relationship diplomacy. However, it has clear limitations in solving this seventy-year confrontation and almost three-decade nuclear crisis if he sticks to the CVID (Complete, Verifiable and Irreversible Denuclearization) or grand bargaining via the Libya model. The solution must be a series of agreements based on incremental, reciprocal, and simultaneous concessions from both sides that would build mutual trust strong enough to make long-term, positive diplomatic momentum “irreversible.” Washington should convince Pyongyang that it really wants North Korea to be another China or Vietnam rather than a Libya. To do so, the United States must recognize Pyongyang’s existential fear of survival and use both carrots and sticks to encourage Pyongyang to make the right decision. This entails the partial lifting of sanctions for the resumption of inter-Korea economic cooperation in return for serious denuclearization efforts from North Korea, and Moon should play a crucial role in this process with his mediation diplomacy.

Inyeop Lee is a Visiting Professor in Politics at Washington and Lee University and co-author of “Politics in North and South Korea (Routledge, 2018).