A Nightmare for For China: What Would Beijing Do if Kim Jong-un Dies? 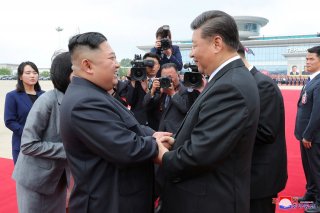 A leadership transition in North Korea would present both tremendous risk and opportunity for all stakeholders in Northeast Asia, perhaps most acutely for China.

Beijing has long touted its role as a champion of peace and stability on the Korean Peninsula while using its relative proximity to Pyongyang to systematically undercut Washington’s approach to North Korea. Even at the height of the United States’ “maximum pressure” campaign in 2017, for example, China cast North Korea a vital lifeline through facilitating illegal ship-to-ship transfers of coal, petroleum, and other commodities.

Beijing has long sought to exert control over a notoriously recalcitrant regime in Pyongyang to expand its clout and secure its sphere of influence in Northeast Asia. My colleagues and I examine in a recent CNAS report how exactly China is advancing these aims amid competition with the United States. A political shock in the form of a leadership transition in Pyongyang, while riddled with profound risks and unknowns for all countries in Northeast Asia and beyond, could also present itself as an opportunity for China to ensure that North Korea remains squarely within its orbit.

Indeed, as American diplomacy with Pyongyang proceeded in fits and starts over the past couple of years and seemed to thrust the United States’ relations with the Kim regime into unknown territory, Xi Jinping energetically pursued diplomacy with Kim Jong-un after years of strained bilateral relations. China has also dangled the carrot of potential investments into North Korea, particularly through strategic infrastructure projects should Pyongyang’s demands for the relief of international sanctions have come to fruition.

Beijing may prize stability in its periphery above all else, but its long-term strategy toward the Korean Peninsula ultimately extends beyond simply preserving the status quo. A North Korean political contingency and its potentially destabilizing knock-on effects would undoubtedly be a foreign policy nightmare for China. This does not, however, preclude Beijing from ultimately leveraging it as an opportunity to double down on its influence over the Korean Peninsula. Particularly through extending the tendrils of its economic influence and entanglement with both North and South Korea, China is primed to leverage uncertainty to shape the trajectory of North Korea’s political future and fully expects that the United States will seek to do the same.

Kristine Lee is an Associate Fellow with the Asia-Pacific Security Program at the Center for a New American Security (CNAS), where she focuses on U.S. alliances and partnerships in the Indo-Pacific region, U.S.-China relations, and managing the North Korea threat.