No Fire and Fury: 2020 May Be a Quiet Year for U.S.-North Korea Relations 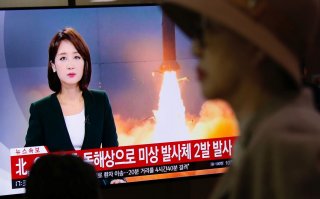 For several reasons, this year will likely be a hiatus in serious U.S.-DPRK diplomacy.

The re-election of President Donald Trump in November 2020 is far from certain. Pyongyang therefore has little incentive to engage in hard bargaining to reach an agreement that might be overturned by a new U.S. president in January 2021.

A major impetus for Pyongyang’s diplomatic outreach to Washington has been the desire for relief from international economic sanctions. That desire was insufficient, however, for the two countries to reach a deal in Hanoi in February 2019. Besides, Pyongyang is likely less desperate now because of China’s half-hearted sanctions enforcement.

The COVID-19 virus outbreak in North Korea, presumably serious even though Pyongyang has implausibly refused to acknowledge any cases among North Koreans, will create a sense of internal vulnerability that would make the leadership even less likely than usual to discuss giving up the country’s nuclear and missile programs.

On the U.S. side, Trump doesn’t need a dramatic improvement in U.S. relations with North Korea in 2020. The issue is in remission for his supporters, who no longer see discussions of North Korean nuclear weapons prominently featured in the popular press, in contrast to 2017.

It is true that Pyongyang typically sees a U.S. presidential election season as a time to regain American attention. The space for doing that, however, is now much constrained. Since 2010, South Korea has an announced policy of responding militarily to lethal North Korean attacks, a policy Pyongyang seems to take seriously. A nuclear bomb test would badly harm the recent improvement in relations with China. Trump has announced he acquiesces to North Korean tests of short and medium-range missiles, so these tests now have minimal political impact in the United States. That leaves the possibility of long-range missile test. Pyongyang has refrained from such a test since 2017, and by the Trump Administration’s own criteria this would constitute a mini-crisis. Kim threatened earlier this year to resume long-range testing if Washington did not make concessions.

If Kim’s analysts of U.S. politics are astute, they are aware that a long-range missile test risks insignificant gain and significant loss for North Korea. The reminder that North Korea has intercontinental ballistic missiles (ICBMs) capable of reaching the U.S. homeland, combined with the end of Trump’s gentleman’s agreement with Kim, would expose as false Trump’s claim that America’s North Korea problem is solved.

But this would not likely spur Trump into seeking a quick and ill-advised deal with Pyongyang. Trump resisted that proposition in Hanoi. Trump pivoted from insulting Kim in 2017 to praising him in 2018, and he could relatively easily pivot back to a bellicose posture, as he hinted in December 2019. As little upside as there is for North Korea, the downside of an ICBM test is that it could marginally weaken Trump’s chances of winning what could be a close election by negating a perceived Trump foreign policy success. Pyongyang would be foolish to jeopardize having another four years of an American president who disparages the value of the U.S.-South Korea alliance and their joint military exercises.

If the usual false hope of a breakthrough in U.S.-DPRK relations is off the table for 2020, it still appears available in Pyongyang’s relations with South Korea, where President Moon Jae-in government remains ready to talk economic benefits now and de-nuclearization later.