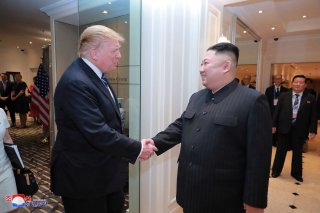 The coronavirus is one important variable. Along with existing international sanctions, the coronavirus would exacerbate economic situation in North Korea. Kim Jong-un is now sending messages to China asking for its help, but it will not be seeking help from the United States. Kim Jong-un would not ask for help from South Korea either. North Korea thinks that the Hanoi failure is partly due to the wrong role of South Korea as a mediator between the North and the United States.

Does Kim Jong-un have other options like nuclear weapon test or ICBM test? This will be a risky option for Kim. He failed in Hanoi and does not want another risk. North Korea is a small society with rumors spreading quickly. Kim already lost his reputation in North Korea after he purged his staff atrociously. The Hanoi failure was another one. He does not want to rock the boat. For now, Kim would wait and see who the next President of the United States will be.

President Trump might have realized that his original dream to denuclearize North Korea and make North Korea economically prosperous is no longer a viable goal. He will not pursue a bad deal. He will not remove sanctions on North Korea because he hopes that sanctions might change Kim Jong-un’s thinking. For now, Trump’s purpose in dealing with Kim is for his own political gain. Trump will try to use North Korea issue for his Presidential campaign. Preventing Kim from testing an ICBM or nuclear weapons is Trump’s current objective. Trump knows that it is not easy to come up with a grandiose deal with North Korea so that it would be a big political gift for him.

Hyun-Wook Kim is a professor at Korea National Diplomatic Academy.