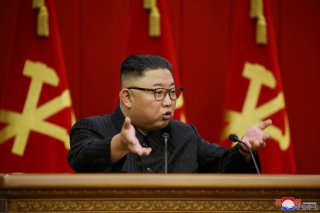 In April 2021, during a speech to ten thousand members of the Korean Workers' Party, Kim Jong-un admitted that North Korea is in the most difficult situation in its history and is now on the brink of a precipice. The North Korean leader called on party activists to undertake another "arduous march" full of "work and sacrifice," according to reports in North Korean state media. The term arduous march is a reference to the crisis in North Korea in the early 1990s, when up to 3 million people died in the country as a result of the famine. Kim urged party members to "be more proactive and take responsibility for implementing the new five-year economic plan adopted at the Korean Workers' Party Congress in January 2020.

North Korea is currently experiencing the effects of a collapse in trade with China caused by this move. Combined with the sanctions imposed on Pyongyang by the United Nations over the development of its nuclear and missile program, the country remains in a severe economic crisis, casting doubt within the North about the regime's ability to fulfill its Byungjin (parallel development) Policy. In mid-June 2021, Kim Jong-un made a rare public admission that the North's food crisis was becoming "tense" as a result of typhoons and floods from 2020. Pyongyang residents ceased receiving government rations in April and the economy witnessed major increases in prices of fuel and foods; the North will maintain its "anti-epidemic posture" for the foreseeable future. The Food and Agricultural Organization (FAO) estimates there will be an 860,000-ton crop shortage for the coming harvest year, equivalent to 2.3 months of food consumption nationwide.

North Korea became the first state in the world to close its borders in response to Covid-19, doing so in January 2020. Before the World Health Organization determined that the coronavirus outbreak was a global public health emergency, North Korea's leader Kim Jong-Un recognized that the epidemic was not only a danger to human health, but was also a threat to his totalitarian rule. The closure of North Korea's borders in early 2020 out of fear of a coronavirus pandemic brought its economy to the brink of collapse, exacerbating shortages of food, electricity and essential goods. North Korean authorities describe efforts to protect the country from the coronavirus epidemic as a matter of "national existence." Kim Jong-un admitted that the previous five-year economic plan had not been implemented in nearly all sectors due to chronic food and energy shortages caused by North Korea sanctions, the pandemic, and floods.

North Korea will likely remain stabilized due to the emerging regional dynamics that are unfolding. China is calculating the trajectory of the United States-China rivalry, caused by the renewed American critique of unfair Chinese trade practices, human rights violations, political repression of the Uyghurs and the citizens of Hong Kong, and continued military posturing in the South China Sea and against Taiwan. North Korea, even if the worst of political and economic outcomes come to fruition, will serve to distract the United States, giving China potential leverage. China will support North Korea out of its vested regional interests. Beyond that, North Korea's history of survival accompanied by other "arduous marches," points to the dictatorship of Kim Jong-un to remain in power, regardless of the success or failure of the Byungjin Policy.

Grażyna Strnad is an Associate Professor in Adam Mickiewicz University’s Faculty of Political Science and Journalism and Vice President of the Polish Korean Society.