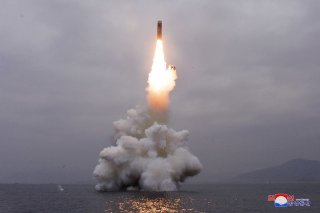 Note: The following is a letter to the Editor in response to an opinion piece authored by Daniel R. DePetris regarding North Korea's SLBM capabilities.

On September 7, 2020, The National Interest (TNI) published an article critiquing Beyond Parallel’s analysis of a satellite image acquired on September 4, 2020 regarding activity at the Sinpo South Shipyard in North Korea.  In it, the author accuses our analysis as being “more bark than bite” and as “over-reading and/or sensationalizing North Korea’s ballistic missile development.”  The article quotes former IC officials and cites two specific examples of prior submarine-launched ballistic missile tests (May 2015 and October 2019) to illustrate the point that, “the notion that an SLBM launch would be some new development is inaccurate.”

This is flawed reasoning for a couple of reasons. First, the May 2015 and October 2019 tests are not reflective of a true SLBM capability as both tests were launched from submerged barges. What Beyond Parallel is gauging is North Korea’s emerging capabilities of launching from a fully deployed and operational ballistic missile submarine. The article’s argument may have been more effective had it cited the August 2016 test, during which North Korea successfully launched a ballistic missile from what was likely the existing experimental ballistic submarine. But this has yet to be confirmed by the U.S. government.

Second, even if the August 2016 submarine launch were to be confirmed by U.S. officials, the author’s warped representation of our analysis as threat inflation is hardly a cogent argument. North Korea is undeniably developing the second leg of its nuclear triad. Regardless of when strategic viability of sea-based capabilities will happen, experts should not be discouraged from pointing this out to encourage policymakers to address the challenge instead of looking the other way. The alternative would be to act reactively once North Korea has successfully developed a survivable nuclear force.

The basis of our work is to provide timely, factual, and objective analyses to policymakers and to the public.  We welcome debate and open discussion in the Korea-watchers community regarding our analyses, but this article published in TNI examining our work is skewed, if not wholly misleading.

Victor Cha serves as Senior Adviser and Korea Chair as CSIS as well as  Vice Dean for Faculty and Graduate Affairs and D.S. Song-KF Professor of Government, Georgetown University.