North Korea Is About To Be Swamped By Coronavirus. Why Does Pompeo Keep Sanctioning Them? 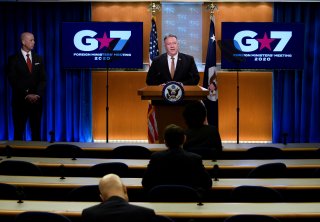 The COVID-19 pandemic is a reckoning for the United States’ relationship with North Korea. For decades the United States’ main tactic for dealing with the Kim regime has been to sanction it, even though there is growing evidence that “maximum pressure” does little but kill ordinary North Koreans. The United States faces a choice. Either it recognizes that maintaining pressure during a pandemic is a dereliction of our duty to global public health, or it doubles down in a grossly irresponsible attempt to sanction the regime into capitulation. A recent statement by Secretary of State Mike Pompeo suggests the Trump administration has already chosen the latter option, putting the lives of millions of North Koreans—and Americans too—at risk.

The North Korean health system is among the worst worldwide. It simply cannot withstand a major outbreak of COVID-19. In fact, a 2019 report on global health security from Johns Hopkins University and the Nuclear Threat Initiative rated North Korea last in the world for “rapid response to and mitigation of the spread of an epidemic.” Organizations like Doctors Without Borders are finally getting medical aid to the country, but the process—impeded by the sanctions bureaucracy—has been dangerously slow and arduous. Human rights officials at the UN, recognizing the risk to public health, are now endorsing sanctions relief to ensure aid enters the country quickly. On Tuesday, UN High Commissioner for Human Rights Michelle Bachelet called for easing broad sectoral sanctions on countries like Iran, Venezuela, and North Korea. She warned that these states already have “frail or weak” health systems that could be completely overwhelmed without help from outside. “In a context of global pandemic,” Bachelet remarked, “impeding medical efforts in one country heightens the risk for all of us.”

It is disturbing, then, that the administration continues to promote economic sanctions against North Korea despite the potential for health system collapse. At the G7 meeting on Wednesday, Pompeo declared that “all nations must remain united in calling on North Korea to return to negotiations and stay committed to applying diplomatic and economic pressure over its illegal nuclear and ballistic missile programs.” His remarks are in direct contradiction to the advice of the United Nations. They also appear to contradict the wishes of President Donald Trump, whose recent letter to Kim Jong-un expressed a willingness to help North Korea with “anti-epidemic work.” Trump has self-serving reasons to try and keep diplomatic engagement with Kim alive, and Pompeo’s statement raises the question of whether Trump meant it at all. This is par for the course with the Trump administration, which has a long history of promising the moon to the North Koreans while refusing to offer the one concession they really want: fewer sanctions.

Despite occasional hints at a more pragmatic approach, the administration’s nuclear talks with North Korea have been defined by a you-go-first demand for unilateral disarmament. Give up all your weapons, Trump and Pompeo propose, and then—and only then—the United States will relieve sanctions. Experts have been near-unanimous in pointing out that this diplomatic approach is destined to fail. They have argued repeatedly that a step-by-step process in which sanctions are gradually eased in exchange for tangible actions by the North is far more likely to succeed. Yet again and again the administration returns to “maximum pressure,” which it seems to regard as a kind of skeleton key for extracting concessions from every manner of adversarial regime.

Maximum pressure is a failed tactic—even on its own terms. But adhering to it in the face of a murderous pandemic opens up the question of whether maximum pressure has become more than simply an instrument to bring stubborn adversaries to heel. The foreign policy community often assures us that sanctions are merely a “tool”—one of many—that governments use to pursue their own interests. Yet when a tool is consistently applied by a country’s government even at risk to that country’s own health, then it has become something else entirely. It has become an obsession. The means—pressure—have also become the ends.

Others have emphasized that “the cruelty is the point” when it comes to the Trump administration’s domestic policy, but its refusal to ease sanctions to aid the fight against COVID-19 suggests this statement applies to its foreign policy as well. This pursuit of punishment for punishment’s sake is now recklessly endangering the health of the world. If there is an outbreak in North Korea, millions within its borders will be at risk—as will many in China and South Korea, countries that only recently began to get the epidemic under control. And make no mistake, Americans will be put at risk too. As High Commissioner Bachelet implied, there is no distant “elsewhere” in a pandemic. Preventing medical aid from reaching North Korea also puts American lives in danger. In that sense, we are all now victims of maximum pressure.

John Carl Baker is the Nuclear Field Coordinator and Senior Program Officer at Ploughshares Fund. He manages the organization’s portfolio of North Korea-related grants, develops strategy for its grassroots grantmaking, and works to increase coordination among funders and NGOs in the nuclear policy field. His works of commentary and analysis have appeared in the New Republic, the Bulletin of the Atomic Scientists, the National Interest, and other publications.