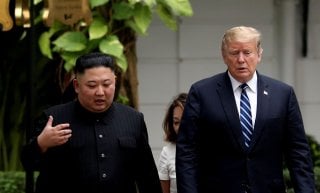 North Korea and the United States have been fighting a battle of words, struggling for control of the narrative.

In the summer of 2017, President Donald Trump threatened “fire and fury” against North Korea in a tweet. Chairman Kim Jong-un responded with his own insults, topped off with saying that the “nuclear button is on his desk at all times.” Trump’s response to that was this tweet: 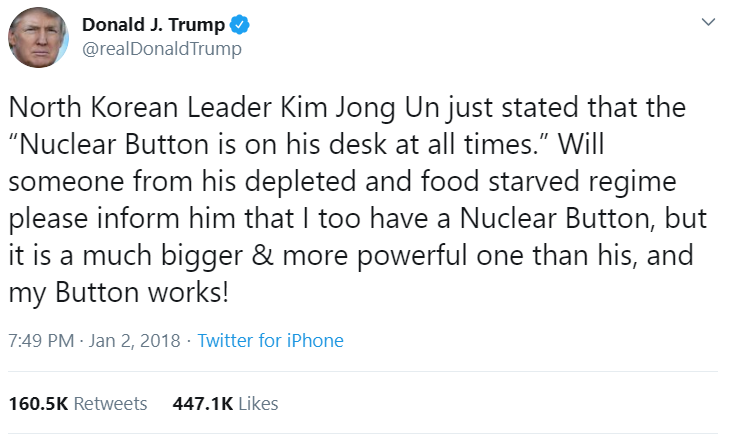 Such verbal jousting took place alongside sanctions imposed by the United States on North Korea and North Korea’s continuing development of its nuclear weapons capability—eventually with summits in Hanoi and Singapore thrown in.

On the diplomatic front, Secretary of State Mike Pompeo has pressed for dominance with “denuclearization.” This struggle is over the word “denuclearization” itself, which Kim uses as the same sort of long-term goal as the Nuclear Nonproliferation Treaty’s general disarmament, but Pompeo uses to mean North Korea’s giving up all its nuclear weapons and the program that produced them. Pompeo has pressed this meaning of the word alongside “complete, verifiable, and irreversible disarmament” and “final, fully verified denuclearization” to emphasize his point.

Little diplomacy has taken place since the Hanoi summit of February 2019. Trump seems to have lost interest in the interaction, and has minimized North Korea’s missile testing over the past year.

We don’t know the status of COVID-19 in North Korea. Without acknowledging that a single case of the coronavirus exists, North Korea has accepted medical assistance from international aid groups. Trump sent Kim a letter offering aid, but North Korea has appeared not to have given much of a response.

While Trump has put his effort into controlling the narrative, Kim has continued to build his nuclear and missile programs. Although it is not possible to observe a buildup of nuclear weapons, Kim’s uranium enrichment facilities likely continue to produce bomb-grade uranium. Missile tests have also continued and Pyongyang’s arsenal probably contains tens of nuclear weapons. They have tested missiles capable of reaching the U.S. mainland, but it is not clear that they have been able to attach nuclear warheads successfully to their missiles.

Last week, Pompeo urged the G7 to “remain united in calling on North Korea to return to negotiations and stay committed to applying diplomatic and economic pressure over its illegal nuclear and ballistic missile programs.” He also again claimed that Trump and Kim agreed in Singapore on the “denuclearization of North Korea.” The North Korean foreign ministry singled out Pompeo’s insistence on their giving up their nuclear weapons program as a reason that diplomatic dialog could not proceed. Their statement is fiery and implies that Pompeo is acting in contradiction to Trump’s wishes.

Pompeo has been the international voice of the Trump administration during the crisis. His focus seems to be on the Middle East, Iran in particular. It may be that he and others determined to crush Iran see an opportunity in Iran’s severe disease crisis. However, a plan for more attacks in Iraq against an Iran-supported militia group ran into opposition from the American commander there. Now, the latest verbal salvo from North Korea could draw Pompeo’s attention back to Pyongyang.

The credibility of both sides’ words may suffer in the pandemic.

Both U.S. aircraft carriers in the western Pacific have cases of COVID-19. The USS Theodore Roosevelt went to Guam to have its entire crew tested, and the USS Ronald Reagan is remaining in port at Yokosuka, Japan, with two identified cases. The captain of the Theodore Roosevelt has published an open letter begging for help. The Marine Corps has stopped accepting new recruits at its Parris Island, South Carolina boot camp, where an outbreak of COVID-19 is in progress.

At the moment, North Korea seems to be in control of the narrative: Claiming no cases of COVID-19, continuing missile tests, building roads at a launch control center and verbally attacking Trump and Pompeo. But, given what is happening in the U.S. military and that a Russian nuclear submarine is now quarantined, it is hard to believe that North Korea does not have similar problems.

COVID-19 disregards both harsh tweets and state propaganda and offers no summit photo-ops. It should focus the attention of both leaders on urgent internal issues.

As the Trump and Kim administrations face a pandemic that is beyond their control, will they continue trying to control their narrative? The full force of the pandemic has yet to hit the United States, and probably North Korea. How long before they recognize that their focus needs to be on protecting their own people from disease?

Cheryl Rofer is a chemist writing on national security issues, nature, science, and women's issues. She writes at Nuclear Diner and Balloon Juice.