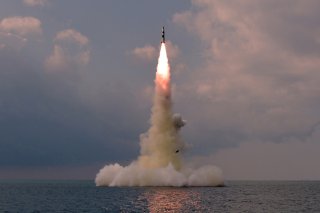 Earlier this month, North Korean leader Kim Jong-un officially declared that nation a nuclear weapons state, declaring that North Korea will not give up its nuclear capability.

“The purpose of the United States is not only to remove our nuclear might itself but eventually forcing us to surrender or weaken our rights to self-defense through giving up our nukes so that they could collapse our government at any time,” Kim said in the speech at the Supreme People’s Assembly last Thursday, in a transcript released by the Korean Central News Agency and cited by the Associated Press.

“Let them sanction us for 100 days, 1,000 days, 10 years or 100 years… We will never give up our rights to self-defense that preserves our country’s existence and the safety of our people just to temporarily ease the difficulties we are experiencing now.”

The speech was accompanied by a new “nuclear law,” which had been passed at the same time, governing how and when the regime could use nuclear weapons, especially in the event of a threat to the regime itself.

“The Secretary-General reiterates his call to the DPRK to resume dialogue with the key parties concerned with a view to achieving sustainable peace and the complete and verifiable denuclearization of the Korean Peninsula,” the office of United Nations secretary-general Antonio Guterres said in response to Kim’s threats.

Convincing North Korea to give up nuclear capability has been a focal point of past and theoretical future diplomatic efforts directed by the United States and its allies toward North Korea. What does the declaration mean for the future of such efforts?

According to experts quoted by Voice of America, the declaration could threaten the Kim regime itself, especially if it’s followed by the actual use of the weapons.

“The United States has actually been perfectly clear about what would happen to North Korea if it ever used a nuclear weapon,” Bruce Bennett, a defense analyst at the RAND Corporation,” told VOA.

“The 2018 nuclear posture review says that if North Korea uses a nuclear weapon, the regime will not survive. Since survival is the regime’s number one objective, this is an effective deterrent objective if the U.S. is serious about implementing it.”

Ken Gause, director of the Adversary Analytics Program at CNA, told VOA that the law is likely a response to what is seen as South Korea’s “decapitation strategy,” which would, in the event of a North Korean nuclear attack, seek to take out the North Korean regime.

“With the ROK’s recent reference to its ‘kill chain’ strategy and the ongoing U.S.-ROK discussion of ‘strategic assets,’ we can also view the new DPRK law and Kim Jong Un’s speech as a response to those developments,” Evans Revere, a former State Department official, told VOA.