A North Korea Crisis for Christmas 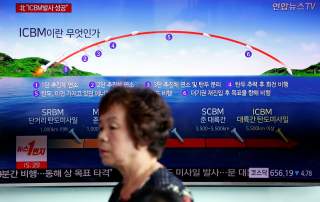 There will be a North Korea crisis for Christmas this year.

Trump issued his warning, in the form a two-part tweet, after Pyongyang took steps to pressure the White House.

Kim is about to make his next move soon—and it appears he will make a mistake.

“Kim Jong Un is too smart and has far too much to lose, everything actually, if he acts in a hostile way,” Trump wrote in a two-part tweet Sunday. “He signed a strong Denuclearization Agreement with me in Singapore. He does not want to void his special relationship with the President of the United States or interfere .  .  .  with the U.S. Presidential Election in November.”

Hours before, the North announced it had conducted a “very important test” at the Sohae satellite launch site—probably a static engine test for an intercontinental ballistic missile—and more significantly announced it was calling off “denuclearization” discussions with the United States. “We do not need to have lengthy talks with the U.S. now and the denuclearization is already gone out of the negotiation table,” said Kim Song, North Korea’s U.N. ambassador, in a statement.

Kim Jong Un in April had given Trump a year-end deadline to reach an agreement. This month, the dictator had one of his officials drive home the point. “The dialogue touted by the U.S. is, in essence, nothing but a foolish trick hatched to keep the DPRK bound to dialogue and use it in favor of the political situation and election in the U.S.,” said the foreign ministry’s Ri Thae Song, using the initials for the regime’s formal name, the Democratic People’s Republic of Korea. “It is entirely up to the U.S. what Christmas gift it will select to get.”

The North Koreans are getting arrogant, but who can blame them? They have, after all, been getting the better of the United States since the middle of May of last year. At this moment, they are just pushing to see if they can get even more.

Pushing for more would be a misjudgment, however. Kim seems to think the embattled Trump must seal a deal with him to get reelected, but the North Korean dictator is overestimating his standing among American voters. The president, for instance, was booed at a campaign-type rally in Moon Township, Pennsylvania in March of last year when he touted his then-upcoming meeting with Mr. Kim.

Mr. Kim should remember the aftermath of the Hanoi summit in February. Many, if not most, analysts in the run-up to that event expressed concern the U.S. would make too many concessions to get an agreement. Trump, apparently to the surprise of Kim, walked from the table when the North Korean overreached on the issue of sanctions relief. And, Kim should note, analysts generally praised Trump’s heard-headed maneuver. Kim, in short, is overstating his power to determine the outcome on November 3, 2020.

Pyongyang in this regard should be paying close attention to America’s trade talks with China. Just about every observer believes Trump needs to sign a deal with Beijing to keep equity markets high and to hold the farm belt to give himself a chance of reelection, a sentiment that Chinese talking heads routinely share in public.

Yet Trump, defying expert opinion everywhere, is standing firm in the contentious negotiations, even when he knows that doing so will tank financial markets. “In some ways, I like the idea of waiting until after the election for the China deal,” he said on December 3, sending the Dow down 458 points from the preceding’s day close.

In sum, the North Koreans should not think they hold the key to Trump’s second-term prospects.

Moreover, they should worry about overplaying their hand. It is true that since the middle of May of last year they have been making almost no concessions while Trump has been making many of them. For example, the North has been violating U.N. Security Council prohibitions by launching ballistic missiles and enriching uranium. The regime has also been upgrading its sole plutonium-producing reactor, at Yongbyon. Trump has imposed no costs on Pyongyang for these bold moves.

The North Koreans are used to getting their way, but they should not attribute temporary success to their strength or superior strategy. They have gotten their way only because Trump has been indulgent.

Trump had masterminded a successful policy through the middle of May of last year when his administration was vigorously enforcing sanctions. As the Wall Street Journal reported, the U.S. had cut the international flow of cash to the Kim regime in half. Not surprisingly, during this period Kim was making concessions and Trump was not.

Trump then decided to change course by trying to entice Kim into giving up his missiles and nukes. In May, the Treasury Department decided against designating almost three dozen Russian, Chinese, and other front companies the North Koreans were using to move cash around the world.

Trump explained his change of heart. At the G-7 meeting near Ottawa in early June of last year, he said he was giving Kim a “one-time shot” to disarm. Kim, however, has not reciprocated Trump’s good will, instead pushing his luck.

Kim might want to take lessons from China’s Xi Jinping, who also took advantage of Trump. The American president handed out free passes to Xi on just about everything during 2017 and the first months of last year. The Chinese ruler, however, did not accommodate American concerns and, for the past year and half Trump has hit China with the so-called “trade war” tariffs and with, among other things, restrictions on technology transfers and Chinese acquisitions. At the end of last month, Trump signed into law two Hong Kong bills that Beijing abhorred.

Kim, as we can tell from Trump’s various comments over the past week, is on the verge of losing the president’s good will, and “Rocket Man” is not going to like what’s coming next.

There will be a year-end crisis this year, but it will be one that takes Pyongyang by surprise. All Kim needs to do is ask Xi Jinping what happens when Trump gets frustrated and loses patience.