Is North Korea Getting Ready to Test Another Missile or ICBM? 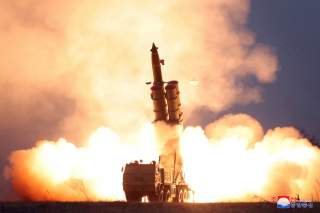 There has been an uptick in U.S. aerial surveillance activity over the Korean Peninsula as of late, which begs the same question reporters have been asking since the New Year: is North Korea preparing to unveil its “new strategic weapon”?

You might remember that term. Several weeks ago, on the eve of the New Year, North Korean leader Kim Jong-un addressed the Central Committee of the Workers Party and used a good chunk of his speech deriding the United States for acting like a two-faced goblin during the previous 12 months. Kim was defiant, angry, and disappointed that the previous year—one that included two meetings with President Donald Trump—resulted in so little. He primed the North Korean people to prepare for what will likely be tough times ahead. Don’t bank on U.S. sanctions relief, Kim said. Instead, tighten your belts and redouble your ability to be self-reliant. The North Korean leader, who seven months ago clasped Trump’s hand as the U.S. president stepped onto North Korean soil in a ceremonial display of bonhomie, ended up spending the end of the year girding for a prolonged period of confrontation with the North’s historic adversary.

Yet it was Kim’s ominous threat to unveil a “new strategic weapon” that soaked up most of the attention in the mainstream press. This is understandable; many journalists in the West who cover the North Korean beat gravitate towards the bright object. It’s the nature of the business. The media isn’t the only one either; the U.S. national security apparatus is right behind them.

On Tuesday, surveillance trackers spotted a U.S. RC-135W Rivet Joint aircraft flying across the Korean Peninsula at 31,000 feet. The flight occurred a day after aircraft spotters picked up a U.S. Navy EP-3E, which presumably was performing a similar mission. The two operations come after a particularly busy month in December, which saw multiple reports of U.S. RC-135W’s, U-2S’s, EP-3C’s, RQ-4’s and B-52 bombers flying over the Korean Peninsula or in the larger vicinity (the B-52 was reportedly found in the airspace to the east of Japan). They also coincide with the strident rhetoric of North Korean officials from Kim on down that Pyongyang no longer feels ties down to the nuclear and long-range missile test moratorium. Pentagon officials will tell you that this kind of talk is not conducive to diplomacy.

Why the sudden increase in U.S. surveillance flights?  There are a number of reasons that may help explain the influx.

The first is that the Trump administration might be concerned that Kim will inaugurate his new strategic weapon to the world in the most reckless way possible: by rolling out a new solid-fueled missile and launching it over the Japanese home islands. This would be a nightmare scenario for Trump, who has used Pyongyang’s long-range missile moratorium as an example of his negotiating acumen. Fortunately for the White House, a long-range missile flight test at this time is also unlikely. With Kim having established working relationships with Chinese President Xi Jinping and Russian President Vladimir Putin—two men who have the power to veto additional sanctions at the U.N. Security Council and are actually advocating for a loosening of the current sanctions regime—the last thing he would want to do is rock the boat.

The second reason for those surveillance missions is far more ordinary: the flights could be about good, old-fashioned preparation in the military domain. The Pentagon is a planning organization with a responsibility to game out various contingencies, test future scenarios, and acquire as much information as possible so decision-makers aren’t caught flat-footed when the unexpected happens. With nuclear talks teetering and Pyongyang searching for an alternative, the U.S. military has even more of an incentive to leverage its intelligence, reconnaissance, and surveillance capabilities for the sake of sharpening their assessments of the situation.

Whatever the reason, nobody should be surprised if more reports emerge about U.S. aircraft hovering in Korean airspace. These missions will continue for as long as Washington sees the need to monitor what Kim may be planning.