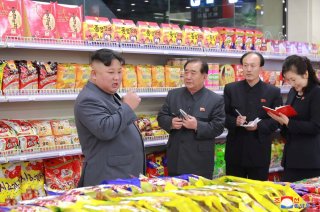 North Korea is, needless to say, not a capitalist country. But that doesn’t mean that it’s completely without commerce.

The Central Committee of the North Korean regime recently announced plans to build out “a new commercial network.” A new article looks at what that might look like in one part of North Korea.

According to Daily NK, North Hamgyong Province is planning to build “general stores,” in order to comply with the regime’s recent edict.

The story, which cited a source in that province, said that the committee’s order has “called on authorities to draw up a basic design plan by the end of November and begin operations of the new network by the end of the year.”

The province, located in North Korea’s northern area and sharing a border with China, is “conceptualizing a plan that would operate provincial markets in accordance with current conditions while inviting private investment to build new general stores of various sizes in densely populated areas, or to expand existing stores.”

Goods at the stores will be sold at lower-than-market prices, the report said, “as the new commercial network is being built under state guidance.” North Koreans can apply to manage the stores.

“So the locals who have heard the news don’t know whether the new commercial network will be managed properly, and are at a loss as to whether to accept the province’s propaganda,” the source told Daily NK. At the same time, existing merchants are beginning to see the new stores as a threat to their position.

“It could grow even tougher to do business,” a source told the site.

Last week, Daily NK likewise reported that North Hamgyong Province’s party committee had turned over several workers at an area food distributor to a prosecutor’s office for the crime of “failing to properly carry out party policy on recycling.”

“The provincial party detained the workers and subjected them to investigation for failing to salvage waste and for throwing out usable items in contradiction to party policy,” the report said. "Amid resource shortages, the party has demanded that companies conserve even the smallest of items and reuse them following approval by ‘experts.’”

This happened after the province reportedly finished “dead last” in a provincial ranking of implementation of the party’s recycling policy. The regime is making an example of those workers, critics told the news outlet.

Workers at the distributor consider the punishment unfair, the report said, arguing that “recycling is based on the waste from production processes, but grain distributors produce no such waste”—a situation not being taken into account so far by prosecutors.