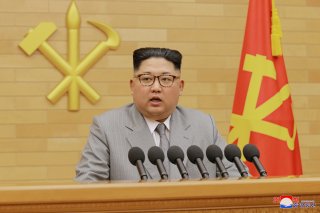 Kim Jong-un has been surprisingly frank in admitting the economic difficulties facing North Korea. A North Korean defector recently stated that Kim’s frankness could earn him more trust from the people he rules. Kim is neither entirely detested by his people nor in any danger of being overthrown by the senior figures in the Party or the North Korean military. During Kim’s first five years in power, he successfully purged those who could have challenged him, including his uncle-in-law Jang Song Thaek. The brazen assassination of Kim’s half-brother, Kim Jong0nam, also displayed Kim’s utter ruthlessness. However, the way Kim rewards and promotes scientists and elites who have contributed to the scientific and economic advances shows that he does not rely solely on brute force. The modernization of the capital Pyongyang and other cities has also been apparent under Kim’s rule, which has earned Kim considerable urban support.

With the coronavirus pandemic, the North Korean leadership has had to ensure that public health and food security do not destabilize the regime. If the North Korean health infrastructure becomes unsustainable, then societal resilience will be threatened and the survival of North Korea will be at stake.

The international non-governmental organizations (NGOs) that entered North Korea in the 1990s to provide famine relief were astounded by the high extent of malnutrition among children and the high incidence of such infectious diseases as tuberculosis. Under Kim Jong-il’s policy of opening North Korea for international assistance, such international governmental and non-governmental organizations as the International Committee of the Red Cross, World Food Program, Doctors without Borders, etc. delivered aid to the needy. Over the years, public health in North Korea has improved. Kim Jong-un continues to invest in the country’s health infrastructure through ongoing engagement with international NGOs, modernizing health policies through cooperation with World Health Organization, sharing data with monitoring institutions, including UNICEF, participating in immunization programs through the Global Alliance for Vaccines and Immunization, among others.

NGOs have also been critical in supplying essential clinical items (including medicines and medical instruments) and training North Korean doctors and nurses. Since 2017, however, their efforts, including the completion of Pyongyang General Hospital, have been hampered by the U.S. maximum pressure campaign and sanctions. With travel bans and being cut off from international medical assistance, North Korea’s health infrastructure is not equipped to deal with the coronavirus pandemic. Hence, the leadership has resorted to a brutish lockdown and closing the border. While these measures could have contained the pandemic, they also ran the risk of aggravating the lack of food and medicine, they contributed to the problem of food and medical supply to the country.

Agricultural output from 2020 was already deemed insufficient, while the lockdown drastically reduced trade between China and North Korea, thus exacerbating further the food security problem. The departure of foreign representatives and the closing down of foreign missions in Pyongyang made it more difficult, if not impossible to gauge conditions accurately. All indications, however, suggest an imminent deterioration to mid-1990s famine conditions. The situation is also exacerbated by the sanctions imposed on the sale of fuel to North Korea, which according to Professor Hazel Smith, is detrimental to agriculture and food production activities.

The coronavirus has also deepened North Korea’s dependency on China’s aid, assistance, and trade. As concerns regarding food scarcity mounted, the border area between North Korea and China gradually reopened for economic activities in 2021. As things stand, China is the most crucial external factor ensuring the survival of the regime and stability of North Korea. Although the border was sealed and there was a strictly enforced lockdown in 2020, China was permitted to dispatch a crew to repatriate the remains of Chinese soldiers and a filming crew, a sign of China’s special status as an ally. As a result, since May 2021, the food supply in Pyongyang has improved, as food became available in Pyongyang’s markets.

However, North Korean food security should not be based solely on the supplies available in Pyongyang. North Korean agriculture is still known for its primitive approaches and dependency on foreign-supplied fertilizers. Notwithstanding some efforts to resort to the Juche (self-reliance) strategy under Kim Jong-un (such as the opening of a new fertilizer plant), the domestic supply of fertilizers is hardly sustainable for all farmers and agriculture activities.

During the great famine in the 1990s, the North Korean people proved to be remarkably resilient but that should not be a reason to let the North Korean people fend for themselves, without health and agricultural resources. Medical and aid-related activities should be exempted from sanctions. As Dr. Kee Park, professor at Harvard Medical School has pointed out, North Korea has been serious about improving its health infrastructure and assistance to North Korea should not be denied solely because of the stalemate over the denuclearization negotiations. The North Korean people should also be connected with the outside world. For example, the Choson Exchange, a Singaporean NGO, has been able to conduct online classes with North Korean students during the pandemic. Since then, other online engagements, including those between Russian academies and universities with their North Korean counterparts, have been discussed and will be launched.

While regime resilience will undoubtedly be guaranteed, societal resilience remains an issue of concern. The political stability of North Korea is assured but possibly at the expense of its people’s welfare. North Korea is due to receive 1.7 million doses of AstraZeneca vaccines through COVAX, the United Nations-backed program, but reports of delayed shipments and the ongoing mutations of the coronavirus have already led the North Korean regime to prepare to fight a lengthy battle for survival. It is pointless to debate the ethics of delaying supplies to such a regime as North Korea, then when the United States continues to deny the North Korean people aid amidst unethical sanctions.

A multi-layered approach to engaging North Korea through governmental and non-governmental channels should assure it of the sincere intent of external parties to help it rethink the potential of credible engagement to open new ways to help its people cope with and overcome their strenuous conditions. Disarmament, not denuclearization, should be part of the high-politics negotiations to gain trust and credibility and to assert a humanitarian agenda as part of the norm, not as a deal that can be forsaken.

Dr. Chiew-Ping Hoo is a professor at the National University of Malaysia. She is the Senior Lecturer in the Strategic Studies and International Relations Program.