Is North Korea At Its Breaking Point? Not Yet. 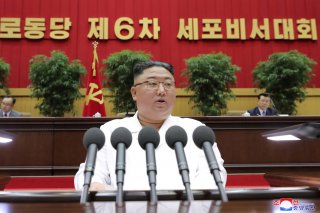 In evaluating the stability of the North Korean political system, analysts are presented with an unfortunate dilemma. While the omnipresent risk of war and the country’s nuclear arsenal underscore the paramount importance of the question, the opacity of that system makes it exceedingly difficult to answer with any degree of certainty.

We can, however, sharpen our analytical focus by considering what factors make governments like North Korea’s more or less stable. Literature on autocratic stability points us to three main “pillars of stability”: legitimation, repression, and co-optation. Specifically, autocracies must simultaneously work to achieve a certain degree of legitimacy in the eyes of their citizenry, maintain high levels of social and political control, and co-opt elites that might otherwise seek to establish their own power bases.

Extreme pressures on the system, such as a financial crisis, natural disaster, or conflict, can adversely impact any or all of these pillars. For example, reductions in state capacity due to economic issues can simultaneously lessen a government’s ability to deliver on socio-economic promises to its citizens, manage dissent, and placate elites through patronage networks.

As such, managing pressures during a crisis is a balancing act, and the consequences of failure can be severe. At the most extreme, such failure can result in uprisings, coups, and/or civil war. However, there are many intermediate steps along the road to such outcomes and regimes often adapt in the face of threats to their rule.

It is far from clear that North Korea is currently facing a breakdown of any of the three “pillars of stability.” Nevertheless, we know that there are tremendous pressures on the system with strict COVID-19 measures further isolating a country that has an economy that is already heavily sanctioned and which has recently experienced a series of natural disasters. Kim Jong Un himself is reported to have stated at a recent meeting of the Central Committee of the Workers’ Party of Korea (WPK) that “the people’s food situation is now getting tense,” a rare acknowledgment of the serious state of domestic affairs.

However, Kim Jong Un appears to have developed a system of governance that is able to manage such pressures in more stable and predictable ways than was the case during the preceding eras of Kim Jong Il and Kim Il Sung.

Since last year, in particular, we see this reflected in increased public acknowledgments of shortcomings in economic development and management, such as his remark cited above, likely aimed at increasing trust in a leadership that presents itself as accountable and responsive to changing circumstances. There has also been a noteworthy uptick in publicly disclosed meetings with party officials convened under Kim Jong Un. Openly displaying the conduct of state affairs with elements of delegated authority to bureaucrats may have increased public legitimacy and co-optation of supportive elites.

Perhaps most impactful, however, may be the revisions to the rules governing the WPK during its 8th Congress in January 2021. Noteworthy, in particular, is the introduction of the position of a “First Secretary” of the Central Committee who is nominally able to represent the General Secretary Kim Jong Un. It is hard to imagine a clearer signal that the leadership is confident in its stability than this delegation of authority, however limited it may be.

At the conclusion of the recent meeting of the Central Committee, Kim Jong Un “solemnly swore on behalf of the WPK Central Committee that the Party will surely break through head-on the difficulties lying in the way of the revolution.” While challenges clearly remain, little at present suggests that the current North Korean regime, with its leadership constellation of personalism and party-centrism, is experiencing instability, let alone is at a breaking point.

Laura Rockwood is the Director of the Open Nuclear Network. She served as the Section Head for Non-Proliferation and Policy in the Office of Legal Affairs at the International Atomic Energy Agency before working as a Senior Research Fellow at Harvard University’s Kennedy School and serving as the Executive Director of the Vienna Center for Disarmament and Non-Proliferation.

Jaewoo Shin is an Analyst for the Open Nuclear Network. He previously worked for the Center for Strategic and International Studies’ Korea Chair, the Konrad Adenauer Foundation and the Council on Foreign Relations.

Matthew Frank is an Analyst for the Open Nuclear Network. His previous work at the One Earth Future Foundation focused on the use of forecasting methods for predicting political instability and violence, while he has also previously worked for the Brookings Institution’s Center for 21st Century Security and Intelligence.