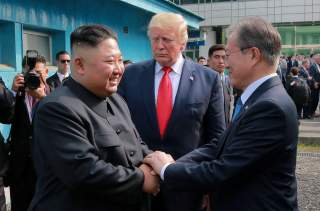 If the North Koreans truly want a deal with their primary opponents – South Korea, Japan, the US, and the West – they are missing an exceptional window of opportunity, right now, in the overlapping presidencies of Donald Trump in America and Moon Jae-In in South Korea. Trump and Moon are the most dovish, on North Korea, presidents of their respective nations in the history of U.S. and South Korean interaction with North Korea. And that their presidencies overlap at this moment are a downright unique opportunity for the North. For a brief moment, North Korea enjoys a dovish, pro-engagement presidency from both its traditional major opponents. If Pyongyang wants a deal, now is the time to go for it.

Traditionally, of course, the U.S. and South Korea have been quite hawkish on North Korea. Until 1987, South Korea was a dictatorship, and its strongmen were predictably anti-North Korea. They sought to build a South Korean national identity against North Korea, and the very first page of the South Korean constitution denies North Korea’s existence and lays sovereign claim to its territory. From 1998 to 2008, South Korea had its first liberal presidencies ever. These leaders were pro-engagement and dovish. One, Kim Dae Jung, even won the Nobel Peace Prize for his outreach efforts known as the Sunshine Policy. But even these presidents never went as far in their Northern solicitation as the current one, Moon Jae-In.

Similarly, all U.S. presidents prior to Trump were reliably hawkish on North Korea. Indeed, the U.S. has frequently been more hawkish on North Korea than South Korea has been. Congress particularly has strongly supported the continuing sanction, deterrence, isolation, and containment of North Korea. And today, except for Trump himself, official Washington continues to be quite hawkish. Trump’s efforts have broadly been dismissed as amateurish photo-op diplomacy aimed a winning Trump a Nobel Peace Prize or the 2020 election.

This long history of Southern and U.S. confrontation, with the long-standing goal of Southern-led unification along the lines of German unity in 1990, makes the current moment genuinely unique.

Moon is sincerely and deeply committed to a breakthrough. He has spoken so aggressively about reconciliation that he was once criticized as the ‘foreign minister of North Korea.’ His outreach efforts and summitry have been so enthusiastic that South Korean conservatives routinely attack him as a North Korean sympathizer, and conspiracy theories are everywhere on the right here that Moon is Marxist anxious to betray the Southern republic. Moon has suggested that North and South Korea form a ‘peace economy,’ and that this inter-connected zone is directed against Japan, the real national enemy of all Koreans. Moon has continued to push against the UN sanctions regime, constantly testing its limits, looking for opt-outs and carve-outs, regularly lobbying the U.S. and Europe to roll-back sanctions, and so on.

Since the Moon administration took power, I have attended multiple conferences at dovish think-tanks like the Korean Institute for National Unification or the Jeju Peace Institute characterized by an extraordinary willingness to bend over backward for inter-Koreas reconciliation. The enthusiasm and desire on the left here are real and deep; I wonder if the North Koreans see this given how brusquely they dismiss Southern solicitations.

Trump too has launched his own mini-revolution of North Korea policy. He has met North Korean leader Kim Jong Un three times, something none of his predecessors ever did and only one (Bill Clinton) even vaguely contemplated. He routinely calls Kim his friend, speaks well of his leadership and even said that he and Kim were ‘in love.’ Trump has walked inside North Korea. He routinely complains that South Korea is a security free-rider on the United States, and he seems to have a particular dislike for the South. The rumor on the East Asian conference circuit now is that if Trump is re-elected, he will seek to pull U.S. forces out of South Korea altogether in his second term. Certainly, he appears willing to trade or swap with the North far more than his predecessors were. Trump may not think of himself as a dove; in 2017, he famously threatened the North with ‘fire and fury.’ But since his 2018 U-turn to reach out to Kim, he has, in practice, been a dovish engager – looking to strike a deal with the North while also talking down the South.

This confluence of doves is an important moment for the North. It is as fragile as it is unique. Moon’s popularity is low, under 40% now. He faces legislative elections next April. If the right wins, it will stymie Moon’s Northern outreach, as Moon has made no effort to recruit center-right support for his program. Trump too is in trouble. He may desire outreach to the North, but no one else in Washington Republican or Democratic establishments seem to. Trump is practically alone on this, and if he is impeached, resigns, or is defeated next year, his successor will almost certainly ‘snap-back’ to a hawkish posture.

So, if North Korea really wants a deal with the outside world, now it the time. Circumstances will not be this propitious again for a generation. Trump and Moon are both dovish outliers. Worse, hawks will claim future vindication if the North does not use this current window to make a deal. A few years from now, hawks will claim that if the North really wanted a deal, it would have reached for one in that unique 2018-2020 window. Because Pyongyang balked in even those uniquely favorable circumstances, that is proof the North does not want a deal at all. Outreach, then, is a fool’s errand, and there is no choice but to hem North Korea in indefinitely. One hopes Pyongyang can see this hawkish interpretation coming because relations will get much worse soon if the North gives us nothing during this unique moment.