North Korea Is More Isolated Than Ever Before 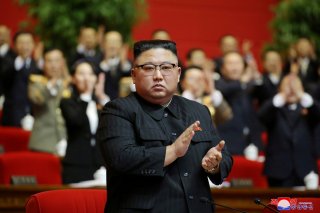 North Korea’s decision to submit a SARS-CoV-2 vaccine order to the GAVI, the vaccine alliance, a United Nations-affiliated entity that helps provide vaccines mainly to poor countries, signaled a dramatic shift in posture. The country had previously turned down South Korean and U.S. offers of humanitarian assistance in dealing with the coronavirus pandemic. Although Pyongyang has yet to report to the World Health Organization a single infection, health experts and former South Korean foreign minister Kang Kyung-wha have been skeptical.

Pyongyang’s vaccine order raises some fundamental questions. Is Pyongyang prioritizing its relationship with the rest of the world over China, by reaching out to the international community instead of asking China for access to its coronavirus vaccines? Is this a harbinger of further opening to come? Does it signify domestic reform to prioritize the welfare of its citizens? The answer to all three questions is: probably not. North Korea has a long track record of selectively accepting humanitarian aid from the international community.

Moreover, it has thus far only secured the promise of 1.7 million doses of the AstraZeneca vaccine, which is not enough for the 2.8 million loyal inhabitants of Pyongyang. Not to mention the logistical nightmare of storing the doses in the country.

Does this portend a flattening of pandemic fear in North Korea this spring? Probably not. North Korea was not among the 104 countries that received vaccine doses as of early April, and they likely won’t arrive in May, either. North Korea is reaping what it has sowed in shunning engagement with the international community since it was founded more than seven decades ago.

More than a year later, much remains the same. Until North Korea’s starts vaccinating en masse, the rationale for the national shut-down will continue to hold. The January  2020 border closing with China in an already insular country cut-off tourism and nearly completely stopped trade with China. While the South Korean press speculates that Pyongyang might soon open the border with China because of an uptick in monthly imports in March, the $13.0 million volume was lower than the $40.9 million monthly average in 2020 and was only 7% of the March 2019 total.

No commercial flights have left the country since March 2020, and only 290 foreigners reportedly remain in the country—mostly diplomatic staff in the capital. Meanwhile, the U.S. State Department has said that the shutdown is preventing international aid groups, including UN agencies, from delivering urgent humanitarian assistance to the country’s most vulnerable populations.

The pandemic’s biggest impacts on North Korea are economic and social, but not political, given North Korea’s totalitarian control. Its economy is crippled and the government is working to re-consolidate control—squeezing what little extra capital it can out of its entrepreneur citizens—the so-called donju. The result is what Kim Jong-un recently described as the country’s “worst-ever situation.” The prospects for a near-term reopening, no matter how limited, are therefore improbable, as is long-term reform.

The Biden administration, for its part, seems unwilling to soften its position on denuclearization, and its reach-out efforts to North Korea have thus far been rebuffed. U.S. Secretary of State Antony Blinken, on a tour of Japan and South Korea, emphasized the goal of complete denuclearization, which could complicate engagement.

Tom Byrne is president of the New York City-based Korea Society. He is also an adjunct professor at Columbia University. Before joining the Korea Society he was the Asia-Pacific, Middle East regional manager in Moody’s Investors Service Sovereign Risk Group.