Is North Korea Preparing a Missile or Nuclear Weapons Test? 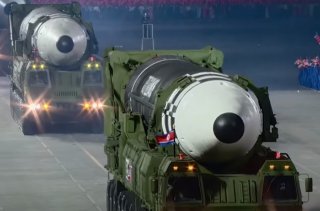 Last month, the Biden administration announced the conclusion of its months-long North Korea policy review. The announcement was about as bland and generic as it could get. The only detail those on the outside received was that the White House was going to take a Goldilocks approach to the North Korean nuclear problem: not too hot and not too cold. There will be no return to the top-down summitry of the Donald Trump years, nor will the United States fall back on Obama-era strategic patience. The rest of the strategy—denuclearization as the long-term objective; diplomacy as a fundamental part of the overall strategy; sanctions fully in place—is familiar to anyone who has thought about North Korea for more than five seconds.

In terms of the Biden administration's foreign policy priorities, North Korea is in the middle of the list—far lower than cementing traditional alliances in Europe and Asia and a few notches below finding a way back into the Iran nuclear deal. For the U.S. intelligence community, however, it’s a different story. The case officers, analysts, and specialists in the Central Intelligence Agency and the Defense Department continue to view the North as a primary security threat in East Asia. The Office of the Director of National Intelligence stated that Pyongyang could resume the testing of nuclear weapons and intercontinental ballistic missiles after a three-year unilateral moratorium. U.S. Air Force and Navy surveillance planes (the E-8C and the EP-3E among them) remain in the air, conducting periodic intelligence missions across the Korean Peninsula to improve Washington's understanding of whatever weapons developments the North may be pursuing.

All of this occurring within the context of a broader U.S.-North Korea relationship that for the time being is standing in place. The North Koreans have not responded to the Biden administration’s diplomatic probing earlier in the winter, likely because the White House’s policy review was just beginning. They have responded to the review with predictable disdain and disgust. Kwong Jong Gun, the director-general of the North Korean Foreign Ministry’s Department of U.S. Affairs, called Biden’s latest comments about the North as more evidence of American hostility.

Secretary of State Antony Blinken continues to hold out hope for dialogue, encouraging the Kim dynasty to “take the opportunity to engage diplomatically.” But even Blinken realizes there is little reason for optimism at this stage. Any optimism that existed evaporated the moment Trump and Kim Jong-un walked away from the table in Hanoi more than two years ago without an agreement. Save for a largely useless meeting between U.S. and North Korean representatives in October 2019 that broke down within hours, the diplomatic track is about as frozen as New York City in the wintertime.

Unfortunately, there is little evidence the tundra is going to melt anytime soon. President Biden and his national security advisers may have no problem calling up their North Korean counterparts and talking about the best way towards the North’s denuclearization, but the Kim dynasty is about as interested in broaching that subject today as it was last year. In other words, it doesn’t appear to be interested at all—unless, that is, Washington negotiates on North Korea’s terms (something no U.S. administration thus far has been willing to do given the immediate denunciations that would inevitably occur back home).

When all is said and done, both the U.S. and North Korea have bigger concerns than each other. Kim Jong-un remains in the thralls of one of the worst economic contractions North Korea has experienced since the famine of the mid to late 1990’s. President Biden is focused predominately on domestic priorities, from ramping up the covid-19 vaccination campaign to pushing through trillions of dollars in spending on improvements in infrastructure and human capital. To the extent senior Biden administration officials are making trips to Asia, China is at the center of their conversations—not North Korea.

Naturally, this would all change in the event Kim Jong-un decides to test more nuclear warheads or one of the solid-fueled long-range missiles his military has rolled out. But at the present time, the Biden administration’s new North Korea policy (assuming the policy is as “new” as the reporting makes it out to be) changes nothing. U.S.-North Korea relations will remain in the doldrums until further notice. The date when the situation changes: to be determined.

Daniel R. DePetris is a foreign affairs columnist at Newsweek and a contributor to the National Interest.