North Korea Is Primed for a Nuclear Test This Month 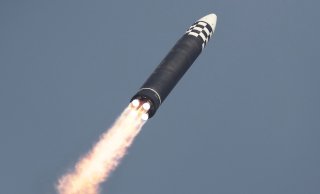 South Korean president Yoon Suk-yeol is on “twenty-four-hour standby” for the possibility of a nuclear test by North Korea, Yonhap News Agency reported earlier this week.

"As North Korea's provocations have become more frequent, we're putting all of our effort into maintaining a readiness posture with a sense of alertness," an official associated with the president said, per Yonhap. “It's a twenty-four-hour readiness regime.”

While the North Korean regime has conducted twenty-six missile launches this year, including another wave in recent weeks, it has not carried out any nuclear tests.

South Korea’s National Intelligence Service has predicted that North Korea will conduct a nuclear test between October 16 and November 7, meaning that such a test would take place before the U.S. midterm elections.

"The forces will conduct real-world day and night maneuvers simulated to counter North Korea's nuclear, missile and other various threats so that they can master wartime and peacetime mission performance capabilities and enhance interoperability with some U.S. forces,” South Korea’s Defense Ministry said, per Reuters.

However, the Kim regime has been talking about its nuclear capabilities.

“It is worth remembering that the details of these reports cannot be trusted,” Leif-Eric Easley, associate professor of international studies at Ewha Womans University in Seoul, told CNN. “The Kim regime is sometimes surprisingly transparent about weapons development goals, but it also tends to exaggerate strength and capabilities.”

Jeffrey Lewis, a nuclear arms control expert at the James Martin Center for Nonproliferation Studies, argued in an op-ed earlier this month for the New York Times that perhaps the West should accept that North Korea is and will remain a nuclear power.

“It’s time for the United States to face reality,” Lewis wrote in the Times. “Efforts to encourage Mr. Kim to abandon his weapons have not only failed, but he is as clear as ever about using them to protect his country. Washington needs to contemplate the unthinkable: accepting that North Korea is a nuclear state. ... The Ukraine war has caused a deep rift between the United States and Russia and, to a lesser extent, Russia’s ally, China. The three big powers were crucial participants in previous multiparty negotiations to disarm North Korea, which ultimately failed. But Russia and China are now less likely to support U.S. pressure on North Korea.”