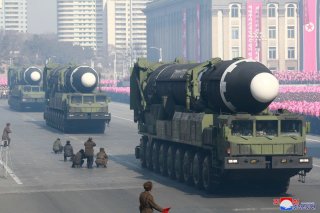 North Korean state media recently aired footage of what appears to be a North Korean launch of an intercontinental ballistic missile (ICBM). State TV displayed the video while reporting on a concert that was thrown as part of a multiday military event held in North Korea’s capital Pyongyang. However, the footage was likely doctored. The launch featured in the video revealed inconsistencies with North Korea’s only confirmed launch of the ICBM weapon system highlighted in the footage.

North Korean state media’s airing of the ICBM launch accompanied the media coverage of a concert that was thrown as part of a multiday military workshop in Pyongyang. Held in the capital from July 24-27, the workshop featured an “intensive training course” for commanders and political officers of the Korean People’s Army and was described by North Korean leader Kim Jong Un as having provided “a new landmark in modernizing” the North Korean military. The workshop coincided with other military events in Pyongyang and elsewhere across the country celebrating the 68th anniversary of the armistice agreement that brought an end to the fighting during the Korean War.

During the Hwasong-15’s test launch in November 2017, the missile was fired from a launch platform that separated from the transporter erector vehicle that delivered it to the firing location. The recently revealed video showed the Hwasong-15 being fired directly from a TEL. And because it is unlikely that a North Korean ICBM test went unnoticed by U.S. and South Korean military and intelligence agencies, the footage aired by North Korean state media has most likely been doctored.

Tests Could be Coming

In recent months North Korea has unveiled two new variants of its Pukguksong-series of SLBMs, neither of which it has tested so far. Satellite imagery analysis of North Korea’s Sinpo South Shipyard revealed activity involving the submersible missile test stand barge located at the facility, which has been used for SLBM testing in the past. Movement of the submersible test barge may indicate that the platform is undergoing some form of maintenance and repair or that it is being outfitted with new equipment, but could also suggest preparations for an SLBM test launch at some point in the future. U.S. and South Korean intelligence officials have also reported that North Korea has likely finished construction of a new ballistic missile submarine and that the Democratic People's Republic of Korea (DPRK) is now waiting for the most opportune time to officially reveal the new vessel.

While the recently released footage of an ICBM launch may have been heavily manipulated, North Korea is likely to continue its efforts to improve its strategic weapons capabilities in the future.