North Korea Remains Self-Isolated and Defiant Amidst the Coronavirus 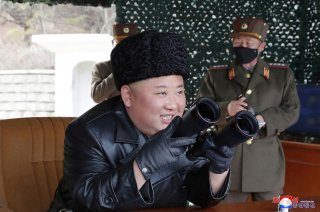 North Korea continues to claim it has no COVID-19 cases, despite all neighboring countries having outbreaks. But Pyongyang’s state media have reported that 7,000 people were being held for “medical monitoring.” Some South Korean NGOs with access to sources in North Korea report that major cities in North Korea have been hit by the coronavirus epidemic and many regions suffer from a shortage of daily necessities. Moreover, the report that people are starving to death in both border regions and inland areas, and more than 100 North Korean soldiers stationed near the Chinese border have died of the coronavirus.

President Trump’s offer of COVID-19 assistance to North Korea was quickly rebuffed by the regime. But the disclosure of Trump’s secret message has generated debate over policy options. Some see a bigger assistance package and reducing sanctions as a way to get negotiations back on track. Others urge even stronger measures against North Korean cybercrime and missile launches. Pyongyang has yet to carry out its threats of revealing a new strategic weapon or resuming long-range missile or nuclear tests. But the regime may do so to garner economic benefits or because it believes it has leverage over Trump in an election year.

Even before the outbreak of COVID-19, Kim Jong-un in late December warned North Koreans to expect dire economic conditions brought on by international sanctions. The regime resurrected earlier campaigns calling on the public to “tighten their belts” after several years of promising an improving economy. North Korea’s subsequent draconian response to the COVID-19 outbreak in China may ameliorate a health crisis, but at the cost of further degrading the economy.

North Korea rapidly implemented quarantine measures far more extensive than those imposed during the 2003 SARS, 2014 Ebola, and 2015 MERS outbreaks. The regime closed its borders, suspended all travel into and out of the country, recalled officials stationed in China, and imposed a quarantine on all inbound cargo. All items transiting North Korean ports or crossing border bridges are kept in isolated areas for 10 days. Pyongyang also imposed severe restrictions on internal travel within the country, cracking down on people crossing provincial borders without special permits.

Pyongyang also cracked down on smuggling—including even reducing their own state-run smuggling. The government ordered border units to prevent smuggling, announced harsh punishments against smugglers, and augmented monitoring. Satellite imagery showed many North Korean commercial vessels that had previously carried sanctioned material to and from China, including via illicit ship-to-ship fuel transfers at sea, were idled in their home ports.

North Korea’s economy has been decimated by the combined impact of sanctions restricting trade, the regime isolating the country from both legal and covert foreign supply chains, Pyongyang’s strong domestic COVID-19 isolation measures, and its repressive socialist economy. Furthermore, North Korea’s foreign currency reserves were already dwindling, and the country is now approaching the lean food months before the fall harvest.

Pyongyang’s isolation measures have indirectly enhanced enforcement of UN economic sanctions. Chinese entities had engaged in prohibited economic activity with North Korea, but both countries have now curtailed smuggling in order to reduce the risk of contagion.

The regime has cut itself off from China which accounts for 90 percent of North Korea’s foreign trade. To counter the loss of income sent back to the regime from North Korea’s workers in other countries, Pyongyang had emphasized gaining hard currency from foreign tourists. But all tourist operations are now suspended. North Korea’s combined exports to China in January and February declined by 71.9 percent to $10.7 million, the lowest figure since February of 2018. North Korean imports from China over the same period declined by 23 percent.

North Korea faces potential disaster. Food prices are soaring, with the cost of rice increasing by 25 percent. The populace, impoverished and malnourished, is at high risk to a devastating outbreak of the disease. The country’s decrepit medical system, even in normal circumstances, is undersupplied. Kim has acknowledged that his country lacks modern medical facilities and called for urgent improvements.

Pyongyang announced on March 22 that Kim had received a personal letter from President Trump offering U.S. assistance in combating COVID-19 and providing a plan to develop bilateral ties. President Trump later confirmed the North Korean statement but did not provide details.

North Korea responded with dismissals and missiles. Pyongyang commended Trump for sending the letter but affirmed previous messaging that the strong personal relationship between Trump and Kim had no bearing on the poor relations between the two countries nor the ongoing nuclear impasse.

Pyongyang has repeatedly warned Washington that until it abandons its “hostile policy” and current negotiating position, there will be no diplomatic talks at either the working or summit level. While Trump’s letter shows that communications remain possible, Pyongyang has made clear it isn’t interested in discussing its nuclear and missile programs.

As if to underscore that message, North Korea has gone on a spree of missile testing. In 2019, the regime launched 26 missiles, the largest annual total since UN resolutions forbidding such tests were enacted. This March 2020, North Korea launched seven more missiles, all in violation of UN resolutions. Pyongyang also conducted several large-scale military exercises, even though the United States and South Korea curtailing their scheduled combined exercises.

U.N. Secretary-General António Guterres has asked for a waiver of sanctions to ensure access to food, essential health supplies, and COVID-19 medical support. There are no UN or U.S. sanctions on food, medicine, or humanitarian assistance. All UN resolutions and U.S. laws have language highlighting that any punitive measures do not cover those items.

However, some sanctions prohibit certain high-tech equipment that could potentially be of use to the nuclear and missile programs. In response to a request from the World Food Program, the UN approved an exemption so diagnostic and medical equipment can be transported into North Korea. In granting the exemption, the UN sanctions committee emphasized that UN sanctions “are not intended to bear a negative impact on the people” of North Korea.

The U.S. position has been to support the UN exemption decision and offer assistance to North Korea while maintaining sanctions until the regime ceases the nuclear and missile activity that triggered the sanctions response. Prior to President Trump’s letter to Kim, Secretary of State Mike Pompeo said that America had offered humanitarian assistance to North Korea after the COVID-19 outbreak and will continue to seek to provide relief.

In February, the State Department expressed the United States’ deep concern about the vulnerability of the North Korean people to a coronavirus outbreak and voiced support for U.S. and international aid and health organizations to counter the spread of coronavirus in North Korea.

With countries focused on combating COVID-19, there seems even less potential for a resumption of nuclear negotiations. At the end of 2019, North Korea rejected dialogue with the United States and declared the regime no longer felt bound by its previous pledge not to conduct ICBM or nuclear testing.

Even if negotiations resumed, the two sides are far apart on even the basis for an agreement. Crafting a good agreement would require extensive diplomatic meetings that would go beyond the U.S. presidential election. If North Korea altered its negotiating position, including in return for economic relief, President Trump might be willing to accept a small deal that, while flawed, could be seen as a first step to final denuclearization.

But it is more likely that Trump would prefer the quiet status quo of the last year where, despite a record high number of North Korean violations of UN resolutions, the lack of major provocations is seen as an improvement over the high tensions of 2017. Knowing that, however, could lead North Korea to threaten or carry out escalatory provocations. Pyongyang may assess that Washington, facing both health and economic crises, would be more malleable to avoid a concurrent foreign policy crisis.

The Trump administration must chart a course between the twin flaws of overreacting and underreacting to a North Korean ICBM test. America should not return to “fire and fury” rhetoric, nor initiate an attack on North Korea for crossing a technological threshold, since that would risk precipitating a full-scale war with a nuclear nation, leading to massive casualties.

The United States should urge the UN sanctions committee to expeditiously process requests for sanctions exemptions to ensure humanitarian assistance is not inadvertently blocked. Washington should also work with South Korea to discuss providing medical supplies to North Korea. Unfortunately, Pyongyang has rejected U.S. attempts at diplomatic and humanitarian dialogue.