Is North Korea Reopening Its Border with China? 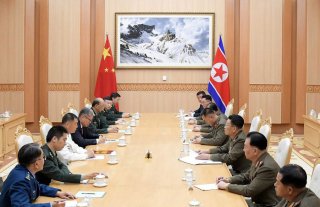 According to Yonhap News Agency, the North Korean regime “appears to be making earnest preparations to reopen its train routes with China after a period of COVID-19-induced border controls.”

This would follow the reopening of sea routes for the receipt of medical supplies.

A spokesperson for South Korea’s unification ministry told Yonhap that the South Korean government “has detected signs indicating preparations for a trade resumption in the regions bordering China, such as the construction of a quarantine facility.” South Korea’s assessment is based on intelligence from the National Intelligence Service (NIS), which also reported that the North Koreans are talking with China and Russia to continue train operations.

“It’s hard to predict the exact date of their resumption. We will continue closely monitoring related movements,” the South Korea spokesperson told Yonhap.

The report also said that, as Kim Jong-un’s tenth anniversary in power approaches, the regime has “removed portraits of Kim’s father and grandfather, former leaders Kim Jong-il and Kim Il-sung, respectively, from the backdrop of official meetings in an apparent move to depart from the shadow of his predecessors.”

The regime has also begun using the term “Kimjongunism,” as a successor to Kimilsungism and Kimjongilism, as South Korean intelligence has determined, per Yonhap.

Also, this week, a UN General Assembly committee approved three separate resolutions related to North Korea, including one demanding the “complete, verifiable and irreversible” abandonment of its nuclear program.

“Other provisions would have the Assembly reaffirm its commitment to the complete, verifiable, and irreversible abandonment of all nuclear weapons and existing nuclear programmes of the Democratic People’s Republic of Korea (DPRK), in accordance with relevant Security Council resolutions,” a summary quoted by Yonhap said.

“The Assembly would reiterate its condemnation of the six nuclear tests conducted by the Democratic People’s Republic of Korea in violation of relevant Security Council resolutions and urge that country’s full compliance… it would welcome all efforts and dialogue to that end, including inter‑Korean summits and summits between the United States and the Democratic People’s Republic of Korea,” the summary continued.

The resolution was rebuked by a North Korean delegate, the report said. The resolutions come as a push is underway for an end of the Korean war declaration.