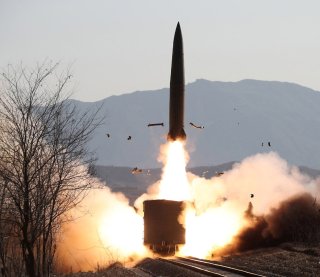 “The audacious initiative that I envision will significantly improve North Korea’s economy and its people’s livelihoods in stages if the North ceases the development of its nuclear program and embarks on a genuine and substantive process for denuclearization,” President Yoon said in that speech, according to The Diplomat and other outlets.

A top member of the North Korean regime has now reacted less than positively.

A statement posted to the state-run KCNA news service from Kim Yo Jong, vice department director of the Central Committee of the Workers' Party of Korea (WPK), and sister of North Korean leader Kim Jong-un, was titled “Don't have an absurd dream.”

“In his situation where he is losing the public support, it would have been better if he had never presented himself on that occasion,” Kim Yo Jong said in the statement. “I'm only saying this today because the south seems to be very eager to know of our reaction and not because I'm concerned of Yoon's situation, as even a mere child would know.”

She also ripped the South Korean president for low effort.

“If he had really wanted to take the platform, I'm curious to know how much effort he had put in to his speech to be unable to say anything that would save his dignity.”

Kim Yo Jong went on to use an animal metaphor.

“Although I'm sorry to say this, dogs will always bark, as a pup or an adult, and the same goes for the one with the title of ‘president,’” she wrote.  “The most repulsive point was when he recited absurd words impertinently of proposing us a ‘bold and broad-based plan’ to radically improve the economy and public welfare if we would stop nuclear development and turn towards substantial denuclearization.”

On Wednesday, North Korea fired two missiles off its Western coast, the first launches for the regime since early June. She addressed that in the statement as well.

“In addition, we made it clear that the previous day's weapon test was conducted on the "Kumsong Bridge" in Anju City of South Phyongan Province, not the Onchon area the south Korean authorities announced rashly and talkatively,” she wrote in the statement.

“I am curious to know why those always talking about the pursuit surveillance and full preparedness under the close cooperation between South Korea and U.S. could not indicate the launching time and place properly and why they do not open to the public data on the weapon system.”