North Korea Says It Can Now Launch Missiles from Trains 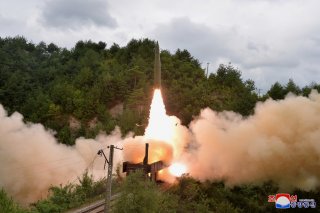 North Korea test-fired a pair of ballistic missiles earlier this week, and it turns out it launched them in a unique way: from a train.

“It was watched by officials of the Department of Political Leadership over Military Affairs and the Department of Munitions Industry of the Central Committee of the WPK and leading personnel of the General Staff of the Korean People's Army and defence scientific research institutions,” the report said. “The Eighth Congress of the Party organized the Railway Mobile Missile Regiment to increase the capability for dealing intensive blow to the menacing forces in many places at the same time during necessary military operation and powerfully improve the ability to more actively cope with all sorts of threats as part of establishment of new defence strategy.”

According to The Drive, the missiles were launched “using a previously unknown railway-based system,” which is called the Railway Mobile Missile Regiment. The site described the new system as “a relatively cheap way for the North Koreans to field additional missiles in a way that would make them significantly less vulnerable to preemptive or counter-attacks.”

Both the United States and the Soviet Union had experimented with train-based missiles during the Cold War, with the Soviets deploying “rail-mobile intercontinental ballistic missiles (ICBM), known as the RT-23 Molodets," the Drive said.

The United States had issued a condemnation, earlier this week, of the ballistic missile launch, while once again calling for a return to diplomacy.

“The United States condemns the (Democratic People’s Republic of Korea) DPRK's missile launch,” a State Department spokesperson told the Yonhap News Agency. “This launch is in violation of multiple U.N. Security Council Resolutions and poses a threat to the DPRK's neighbors and other members of the international community.”

“We remain committed to a diplomatic approach to the DPRK and call on them to engage in dialogue. Our commitment to the defense of the Republic of Korea and Japan remains ironclad,” the State Department said.

The launch followed a cruise missile launch, also by North Korea, a few days earlier. The nation had launched both types of missiles earlier in the year.

This drew a strong rebuke from Kim Yo-jong, the sister of North Korean leader Kim Jong-un.

“If the president joins in slandering the other party, it will inevitably result in counteractions, which will lead to the complete destruction of relations between North and South Korea,” Kim Yo-Jong said.