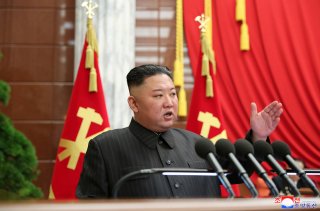 When North Korea held a parade last week, many observers noted that the parade did not include missiles, as parades in that country often do. Instead, at least in the West, most of the reaction dealt with leader Kim Jong-un “stealing the show.”

However, the lack of missiles at the parade doesn’t mean the North Korean regime didn’t have plans for missiles.

Meanwhile, Reuters reported that the missiles fired over the weekend were “seen by analysts as possibly the country’s first such weapon with a nuclear capability.”

“This would be the first cruise missile in North Korea to be explicitly designated a ‘strategic’ role,” Ankit Panda, a senior fellow at the U.S.-based Carnegie Endowment for International Peace, told Reuters. “This is a common euphemism for nuclear-capable system.”

While, as reported by La Prensa Latina Media back in August, the North Korean regime issued a “a maritime exclusion alert,” meaning to indicate to its own ships that a missile test was imminent.

“North Korea usually issues these alerts to ships before carrying out missile launches so that they avoid navigating areas where projectiles could potentially hit the water, although in this case there was no launch,” South Korea’s defense ministry told the news outlet.

That report also stated that U.S. troops had flown a surveillance flight that week over the Korean Peninsula.

When North Korea conducted a cruise missile test, prior to the ballistic missile test in March, President Joe Biden was accused of “laughing off” the idea of the North Korean threat.

“This activity highlights the threat that North Korea’s illicit weapons program poses to its neighbors and the international community,” U.S. Indo-Pacific Command spokesperson Capt. Mike Kafka told a newspaper in late March, after the ballistic test.

“I returned just a short while ago from a trip to the Indo-Pacific, met with our counterparts in Japan and South Korea, and North Korea was a primary topic of conversation in both countries,” Secretary of State Tony Blinken said in a briefing this spring, per the State Department’s transcript.  “And we also discussed it with our Chinese counterparts in Anchorage, Alaska a couple of days later.