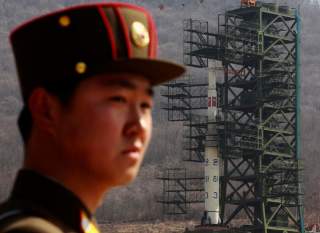 Recent news reports claim that North Korea is continuing its work on long-range ballistic missiles, including the Hwasong-15 which is thought to be capable of reaching Washington, D.C. These claims come from unnamed U.S. intelligence officials who cite satellite imagery of the Sanumdong missile factory just outside of Pyongyang. Yet such activity is not only unsurprising, it also doesn’t violate the Singapore statement. It also does not change the fact that while it is still unlikely that Kim will denuclearize, deterrence and diplomacy are still superior to spiraling threats and escalation.

Nowhere in the statement signed by President Trump and North Korean leader Kim Jong-un is there a promise by North Korea to cease all ballistic missile production. Rather, ceasing such production would be but one of many steps on a long road to an actual, concrete deal. The administration and the media are in a rush to jump to conclusions and to see results, but many forget that the Iran deal took two years to hammer out. None of that work was done before Trump and Kim met and the work being done now will take time.

For the moment, the headlines are about how Pyongyang is—to no one’s surprise—loathe to denuclearize in the face of overwhelming American power and that Trump has—also to no one’s surprise—failed to make good on his promises. Yet, only a few days ago commentators were more hopeful as North Korea returned what are believed to be the remains of fifty-five U.S. service members killed in the Korean War. It is estimated that 7,700 Americans (5,300 thought to be in North Korea) and 33,000 United Nations troops remain unaccounted for after the Korean War. Their families have waited at least sixty-five years later for closure and this is one more step in that direction.

Therefore, as much as one may rightly be skeptical of engagement with a country like North Korea, engagement is the right choice and it has brought some of America’s service members home. Even in the midst of these latest revelations about missile construction, neither the American media nor the leadership in Washington ought to forget the basics of dealing with any difficult, nuclear power.

First, you must always deter to prevent the other side from ever starting a war. Second, you must always keep a line of diplomacy open because that is how you get progress and how you avoid miscommunication that could be fatal when nuclear weapons are involved. And, third, you keep calm and carry on because even if North Korea never denuclearizes, they must be lived with just as America does with Russia and China. The alternative is to risk the use of those weapons and that would be catastrophic. America’s goal should be to avoid war and achieve peace in Korea—regardless of denuclearization.

Yes, the North Koreans initially failed to show up for their original meeting with American emissaries on July 12 to discuss repatriation of American war dead. Given North Korea’s awful track record on a number of previous agreements and its general bellicosity, it was easy to assume that meant no remains would be returned at all. However, North Korean stubbornness is one of their signature negotiating tactics and it would have been used regardless of the circumstances. America needs to stop being surprised by Pyongyang. North Korea has a long and frustrating history of alternating playing nice and playing rough. The media and Washington need to recognize that pattern, learn from it, and anticipate it. They should look at what can be done instead of panicking or rejoicing with every swing in Kim’s words and actions.

It is in this context that we should look at what happened when, two days later, both sides met successfully on July 15. Fifty-five presumed American soldiers were returned. This was a good thing and the return of those heroes would not have happened if President Trump and Kim were still exchanging threats.

Unfortunately, because the war was so long ago not every soldier had dental records (the main identifier before DNA) and the bodies may have deteriorated too much to be identified. To make matters worse, North Korea did not say where those bodies were found, making it harder to match them with battle records. It is also possible that the remains could be of other UN forces or that they could actually be the mixed remains of any number of people. (In fact, mixed remains were returned previously the 1990s when 208 caskets sent from Pyongyang contained about 400 people total.) This is why the United States plans to have all of the remains thoroughly tested.

Therefore, on the one hand, it could be argued that North Korea is going out of its way to be uncooperative. It could have told Washington, or the United Nations Command, where those bodies were found. It could have also sent all two hundred remains it claims to have in its possession rather than just fifty-five. It could have ceased work on those ballistic missiles that are now making headlines.

But, on the other hand, returning the remains is the first step in Pyongyang fulfilling one of the promises laid out in the Singapore Agreement. Finally, U.S. Secretary of Defense James Mattis suggested on July 27, that the Pentagon could send American teams into North Korea to work with them in finding American remains. Doing so would resume a program that recovered 229 U.S. remains starting from the 1990s until 2005 when the program was halted by President George W. Bush.

In the end, the remains of fifty-five Coalition soldiers were brought back and were remembered. This is good for their families and for America. That is something that doesn’t happen without diplomacy. Yes, Kim appears to also be building more missiles and that is not good for America or South Korea. But those missiles will never be launched as long as strong deterrence remains in place and miscommunication is avoided.

North Korea is a difficult, hostile, and backward power that cannot continue forever in its current form. One day, the continued crisis will end—hopefully peacefully—so that there will be no more remains of American service members to recover in the future.

But that will only happen if America continues to be tough enough to deter Kim while wise enough to engage with him—no matter how many missiles he builds.

John Dale Grover is an Assistant Managing Editor at The National Interest. He is also a fellow with Defense Priorities and a writer for Young Voices. His articles have appeared in Forbes, Fox News, The American Conservative, and Real Clear Defense. Follow him on Twitter @JohnDaleGrover.

Image: A soldier stands guard in front of the Unha-3 (Milky Way 3) rocket sitting on a launch pad at the West Sea Satellite Launch Site, during a guided media tour by North Korean authorities in the northwest of Pyongyang April 8, 2012. REUTERS/Bobby Yip (NORTH KOREA - Tags: POLITICS MILITARY TPX IMAGES OF THE DAY)