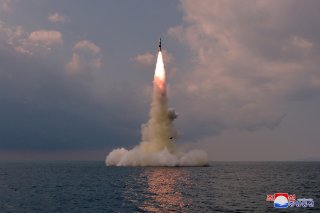 State news agency KCNA reported on Wednesday that the North Korean military test-launched one of its latest ballistic missiles earlier this week. Japanese and South Korea officials corroborated the launch, which took place on Tuesday morning near the eastern port city of Sinpo. According to western accounts of South Korean media reports, the missile is believed to have traveled roughly 450 kilometers and reached a maximum altitude of 60 kilometers.

The Korean Central News Agency claimed that the new missile contains “lots of advanced control guidance technologies” and would  “greatly contribute to putting the defence technology of the country on a high level and to enhancing the underwater operational capability of our navy.” Little has been confirmed about the new missile; photos published from the country’s recent “Self-Defense 2021” weapons exhibition suggest that the missile could be a prototype of a new SLBM design that appears to be smaller than its predecessor. A smaller design enables a greater onboard missile capacity in exchange for a shorter range. No less importantly, smaller weapons are potentially easier to integrate onto a submarine. “Though a smaller North Korea SLBM design could enable more missiles per boat, it could also enable smaller less challenging (ballistic missile submarine) designs, including easier integration/conversion on pre-existing submarines,” Joseph Dempsey, a defense researcher at the International Institute for Strategic Studies, said in a social media post on Twitter. It is unclear if the North Korean military has abandoned work on its older, larger SLBM variant, or if it is pursuing the two SLBM projects concurrently.

The test was accompanied by a new round of condemnation from Washington, with spokeswoman Jen Psaki warning Pyongyang to refrain from further “provocations.” In keeping with recent attempts to restart North-South peace talks, Seoul has urged a nuanced approach aimed at balancing punitive countermeasures with positive incentives. “Action must be taken as soon as possible to stop North Korea from further developing nuclear and missile capability,” South Korean foreign minister Chung Eui-yong said on Wednesday. “I think considering relaxing sanctions can surely be an option.”

The SLBM launch is the latest in a flurry of North Korean high-profile weapons tests held in recent months. North Korean authorities reported in late September that Pyongyang tested a new hypersonic boost-glide vehicle (HGV) system, though a South Korean intelligence assessment maintains that the weapon did not clear the Mach 5 threshold for hypersonic speed. The North’s ongoing weapons tests are accompanied by a steady stream of bellicose rhetoric. In remarks delivered at the country’s Self-Defense 2021 exhibition earlier this month, North Korean leader Kim Jong-Un decried Seoul’s “illogical” and “gangster-like” attitudes, insisting that the DPRK will respond forcefully to the South’s intent to “harm” North-Korea’s right to self-defense.