North Korea Tests an ICBM for the First Time Since 2017 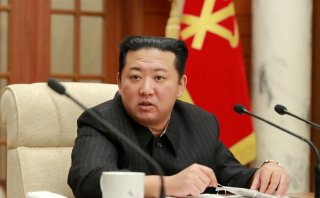 The North Korean regime has recently been making noises about putting an end to its five-year moratorium on testing intercontinental ballistic missiles (ICBMs). On Thursday, it went ahead and did just that.

According to Axios, which cited South Korean and Japanese officials, the missile flew at an altitude of 3,728 miles, going a distance of 596 miles. It was the eleventh missile launch of the year by North Korea.

"This launch is a brazen violation of multiple UN Security Council resolutions and needlessly raises tensions and risks destabilizing the security situation in the region,” White House press secretary Jen Psaki said in a statement after the launch.

"The United States will take all necessary measures to ensure the security of the American homeland and Republic of Korea and Japanese allies.”

The launch came as President Biden arrived in Europe for a summit with European allies on the matter of Russia’s invasion of Ukraine.

According to Sky, the missile landed in Japan's exclusive economic zone (EEZ), and both South Korea and Japan described it as North Korea’s “biggest test ever.” Japanese authorities also described the missile as a “new type” ICBM.

South Korea, meanwhile, fired multiple missiles, in what Sky described as “a live-fire test of multiple ballistic and tactical missiles.”

"They agreed [the North's] latest launch poses a serious threat not only to the Korean Peninsula but also to the international community and it requires stern responses," the South Korean ministry said, per Yonhap. "They urged North Korea to immediately cease further destabilizing acts."

North Korea is banned by international law and United Nations resolutions from testing nuclear weapons or ICBMs. During the time of the diplomatic opening between the United States and North Korea during the Trump administration, the regime had announced a moratorium on both. However, the regime back in January indicated that it was considering breaking that moratorium.

Back in January, CNN cited the state-run KCNA as stating that the “hostile policy and military threat by the U.S. have reached a danger line that can not be overlooked anymore.” This followed sanctions placed by the United States on five North Korean individuals.

Therefore, KCNA continued, North Korean leader Kim Jong-un “gave an instruction to a sector concerned to reconsider in an overall scale the trust-building measures that we took on our own initiative on a preferential ground and to promptly examine the issue of restarting all temporally suspended activities.”

More sanctions were placed on North Korea earlier this month.