North Korea Won't Be Pressured Into Giving Up Its Nuclear Weapons 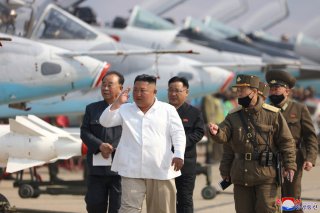 Composure and consistency are hardly attributes that can be ascribed to U.S.-North Korea relations under the Trump administration. The shifts have been sharp and sudden. It went from aggressive hostility with mutual threats in 2016/2017, to an infatuated friendship and diplomatic breakthroughs in 2018, to new North Korean missile tests and threats in 2019 and 2020. This diplomatic turbulence makes it difficult to predict what lies ahead.

Nevertheless, the past year’s events of missile tests suggest a continuation of North Korean behavior from the time before the 2018 diplomatic breakthrough. Although Kim Jong-un in January 2020 proclaimed that he still was “open for dialogue,” he did also cancel North Korea’s unilateral moratorium on tests of ICBMs (intercontinental ballistic missiles) and nuclear weapons. With this and North Korea’s previous behavior in mind, it is likely that more events that include missile, and possibly nuclear tests, will occur at some point during the remaining months of this year.

The observable difference now, compared to before 2018, is the absence of warmongering between Washington and Pyongyang. So far, the United States’ response has been very different from the one displayed before the 2018 rapprochement. Trump publicly “brushed off” the latest North Korean threat in December 2019—not displaying any of the previous animosity. If Donald Trump continues to take such a laissez-faire approach to the threats and missile tests of North Korea, it is unlikely that the relationship sharply deteriorates. This, however, does not entail improved relations either. As North Korea craves recognition and legitimacy, a casual dismissal of the hermit kingdom may well be provoking to the regime.

It is certainly not impossible that the rapprochement of 2018 will reoccur, but as of now, the negotiations seem to be at an impasse. Kim Jong-un will not denuclearize, nor will the United States lift the sanctions. There is a more profound problem to this stalemate. The two actors’ overarching ambitions are locked in an incompatible position. North Korea’s obsession with physical security and regime survival (because of which it has acquired nuclear weapons) stand in direct conflict with the United States’ strategic interest to maintain a military presence in Northeast Asia. New diplomatic breakthroughs are thus not be expected this year—nor in the future until this incompatibility is circumvented and an integrative solution is found.

There are also other, more practical hurdles for improved relations for the rest of 2020. With the outbreak of the coronavirus pandemic, North Korea has completely closed its borders, isolated itself and indirectly declined bilateral cooperation to combat the pandemic, claiming that the country has no cases of the virus. The U.S. leadership is furthermore preoccupied with a re-election campaign, the domestic economy and the ongoing pandemic ravaging the country. The status quo does not constitute a pressing issue for either side.

At the end of 2020, we can probably expect a situation in the bilateral relation similar to the current one. The election result in November is unlikely to change that, as neither candidate seems to offer a solution to the Gordian knot of North Korea and its nuclear weapons. Yet, world politics tend to be unpredictable, so there may well be surprises ahead.

Magnus Lundström is an associate fellow at the Swedish Institute of International Affairs.