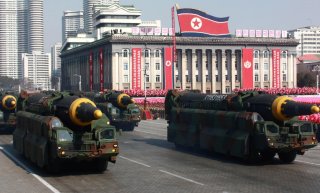 Every North Korean missile test is followed by speculation about its meaning. What is North Korea signaling and who is the signal directed to? Are the dates significant? Or are the launches simply tied to an engineering calendar under which North Korea carries out tests when its weapons development program requires testing? North Korean missile tests appear to offer a kind of Rorschach test for commentators, whose assertions probably reveal more about their perceptions of North Korea and policy interests than they do about the tests themselves.

With the possible exception of Kim Jong-un, no one knows with certainty why North Korea launches missiles when it does. Kim himself may have mixed, hidden, or even subconscious reasons for ordering or agreeing to missile tests at particular times. North Korean government statements do not necessarily provide answers. Even when they publicly attribute reasons for a particular test, they may be taking advantage of the timing of a missile test to gain extraneous benefits. And even if they mean exactly what they say, it is difficult for outsiders to know that.

It is striking that analysts and commentators seem more interested in the “meaning” of the tests than in the hardware itself, at least in public conversation. There is always an effort to locate where the tested missiles land, identify any interesting flight characteristics, and determine if the tested missiles are short, medium, or long-range. But the amount of attention paid to hardware is outweighed by a search for North Korea’s motives.

The schools of commentary might be categorized as follows:

It’s about U.S.-DPRK Diplomacy. Those who want relations between the United States and North Korea to follow a diplomatic path see diplomatic signaling in North Korean missile tests. For them, North Korea launches missiles as a form of dialog. Whether the message is that North Korea is increasing its leverage in preparation for talks or signaling that it does not consider the moment ripe for diplomacy, missile testing is seen as an element of diplomacy.

It’s really about North Korea. According to this school of thought, which is primarily held by North Korea watchers, missile testing is tied to regime legitimacy. Tests engender pride among North Koreans that translates into respect for Kim Jong-un. Another belief is that missile testing might be Kim Jong-un’s way of keeping his military and technical establishments engaged and on his side. Either way, these observers are on the lookout for signs of political life in North Korea. For them, missile testing ought to provide insights into North Korea’s internal constituencies and balances of power.

Any one of these theories—or even all of them—may be correct to varying degrees. They provide useful frameworks for thinking about North Korea’s motives. From a policy perspective, however, it would be imprudent to pick one of them as the sole basis for understanding North Korea. Deciding whether to pursue a strategy of engagement, pressure, deterrence, or patience should be based on a wider logic that does not depend on an accurate diagnosis of the reasons for North Korea’s missile tests. That will remain elusive.

Mark Tokola is Vice President of the Korea Economic Institute of America in Washington, DC. He retired as a U.S. Senior Foreign Service Officer with the rank of Minister-Counselor in September 2014. His last posting was as Minister Counselor for Political Affairs at US Embassy London. Previously he had served as Deputy Chief of Mission at the American Embassies in Seoul, Republic of Korea; Ulaanbaatar, Mongolia; and, Reykjavik, Iceland. Among his other postings were two tours at the US Mission to the European Union in Brussels, Minister-Counselor for Economic Affairs at Embassy London, and Economic Counselor at US Embassy The Hague. He also served as Director of the Iraq Transition Assistance Office (ITAO) in Baghdad from 2007-2008.