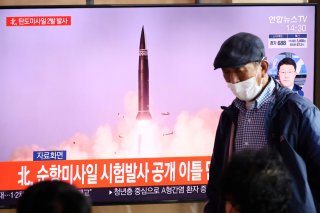 North Korea began 2022 by launching a series of four missiles in a ten-day span. North Korea launched two short-range ballistic missiles in its most recent test on Monday, according to the South Korean military.

Korean state-run media outlet KCNA said that the test was “aimed to selectively evaluate tactical guided missiles being produced and deployed and to verify the accuracy of the weapon system.”

KCNA also released a photo and claimed that the two ballistic missiles were launched in the west of the country and successfully hit their target in the East Sea. The launch took place just two days after North Korea fired a pair of missiles from a train-based platform.

Before the most recent test, the U.S. Treasury Department placed sanctions on six North Korean nationals associated with the country’s weapons programs. The State Department imposed additional sanctions against a North Korean citizen as well as a Russian man and company.

“The DPRK's latest missile launches are further evidence that it continues to advance prohibited programs despite the international community's calls for diplomacy and denuclearization,” said Brian Nelson, the Treasury Department’s chief of terrorism and financial intelligence.

Per CNN, U.S. military officials responsible for assessing missile threats momentarily took actions under the assumption that the missiles could strike the United States.

They feared that the missiles could strike the Aleutian Islands near Alaska or even the coast of California. However, it didn’t take long for U.S. Northern Command and the Northern American Aerospace Defense Command (NORAD) to determine that those areas were not actually in danger. Instead, the missile ended up landing in the sea between China and Japan. The fears still led to some flights on the West Coast being briefly grounded.

"What we're seeing here is just the normal process of coordination and communication out of which early on some decisions were made that probably didn't need to get made," Pentagon spokesman John Kirby told the media last week.

James Kim, an expert at the Asan Institute for Policy Studies in Seoul, said that North Korea is taking advantage of the environment prior to the start of the Winter Olympics in China.