North Korean Missile Tests Are Not in Lockdown During Coronavirus Pandemic 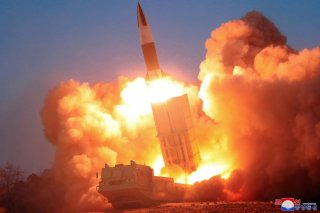 The coronavirus pandemic is going to change the world but it won’t change North Korea’s missile tests, which have occurred three times since the beginning of the global public health crisis. The missile tests serve as a reminder of the persistent stalemate that has existed since the failed Hanoi summit of late February 2019.

This state of affairs will likely persist for the rest of the coronavirus pandemic and potentially beyond. Neither Trump nor Kim are in good positions to initiate a change in the status quo. While this prevents any real progress on U.S.-North Korea nuclear diplomacy, it also means that the current situation is unlikely to deteriorate into a crisis. Actions by either leader could make the situation worse, but both Trump and Kim have incentives to maintain course and not instigate a breakdown.

North Korea’s recent missile tests are unlikely to spark a crisis provided that Kim tests only relatively short-range, conventional capabilities. Of the three tests so far in 2020 two involved a large-diameter rocket known as the KN-25 and one involved the KN-24, a missile that somewhat resembles the United States’ Army Tactical Missile System. In 2019, both missiles were tested very frequently; the KN-25 was tested nine times while the KN-24 was tested four times, all of which were successful.

Several factors point to both the KN-25 and KN-24 being armed with conventional payloads. The KN-25 is simply too small to accommodate a nuclear warhead. The KN-24 might have the ability to carry a small nuclear weapon in the future simply based on its dimensions and test performance, but it is likely a conventional-only system for the time being.

Additional clues that the missiles are not nuclear-capable can be found in how North Korean propaganda organs talk about the missiles. A Korean Central News Agency (KCNA) report on the latest KN-24 test, for example, says “The fire was aimed at reconfirming and showing to the [Korean People’s Army (KPA)] commanding officers the tactical characteristics and power of a new weapon system to be delivered to KPA units [emphasis added].” Explicitly referring to the KN-24 as a tactical weapon is important because nuclear weapons are always called “strategic” in North Korean propaganda. The KCNA report goes on to mention “tactical and strategic weapon systems in the development stage,” but given the context that “strategic” is mentioned it most likely doesn’t refer to the KN-24 itself but other capabilities that haven’t been tested yet.

The technical details and propaganda lines surrounding recent North Korean missile tests are important for keeping U.S.-North Korea relations at a stalemate. With the exception of the Pukguksong-3 submarine-launched ballistic missile launch in late 2019 (from which Kim Jong-un was conspicuously absent), all North Korean missiles tested since the Hanoi summit have been conventional. The tests are still an unwelcome development, but they also demonstrate a modicum of restraint on North Korea’s part.

If the 2020 testing pattern continues and Kim refrains from launching a nuclear-capable ballistic missile, then Trump will likely continue to downplay the tests and not call for a harsher response. This is not good news for South Korea and Japan, the most likely targets of the weapons, but it also means that a return to the 2017 “fire and fury” rhetoric between Kim and Trump is unlikely so long as Kim doesn’t test a nuclear-capable missile.

It is also important for analysts to consider the domestic context of North Korea’s missile tests. At a time of great challenge and danger due to the coronavirus outbreak, Kim is sending a message to his own people and other countries that the KPA will not stop training or incorporating new weaponry to defend North Korea. Demonstrating that Kim is in control and will not let the coronavirus disrupt national defense is important for maintaining his legitimacy in the eyes of the North Korean people and elite.

From Kim Jong-un’s perspective, these domestic-facing signals are probably more critical than whatever message the United States receives from the missile tests.