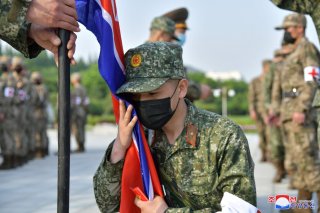 For more than two years, the North Korean regime claimed to have zero cases of Covid-19. Earlier this month, the regime admitted that it had its first case.

Now, that number has gone up considerably.

Meanwhile, Daily NK reported that the regime has ordered factories to “expand production of disease control-related supplies,” along with the arrival of a “maximum emergency quarantine system.”

“With the move to the maximum emergency quarantine system, [State Emergency Anti-epidemic Command] ordered all factories in the provinces to join the ‘battle’ to produce masks, gloves, protective clothing, protective shoes and disinfectants,” a source in North Hamgyong Province told Daily NK.

North Korea is very much short of supplies for dealing with a pandemic, the Daily NK report said.

“Following SEAC’s instructions, all government agencies including the party committee and the people’s committee of North Hamgyong Province have been running themselves ragged to [ensure that factories] fulfill daily production quotas,” the report said.

A separate Yonhap report stated that it is the opinion of the South Korean intelligence services that it’s unlikely that North Korean leader Kim Jong-un has been vaccinated against Covid-19. The National Intelligence Service (NIS) informed South Korean lawmakers in a closed-door session that they don’t believe Kim is vaccinated.

North Korea does not have coronavirus vaccines, having rejected offers of help from international relief agencies. However, the NIS believes that the regime appears to have come around on the effectiveness of such vaccines.

Another NK News report stated that North Korean hackers, specifically the Kimsuky group, have sought to take advantage of the outbreak, distributing fake press releases that include malicious code.

The North Korea outbreak is taking place as President Biden is visiting the region. Yonhap reported that North Korea will be one of the topics discussed while the president is in South Korea this weekend. Moreover, North Korea is “widely expected to stage additional provocations in the days to come.”

“On this trip, he will have the opportunity to reaffirm and reinforce two vital security alliances, to deepen two vibrant economic partnerships, to work with two fellow democracies to shape the rules of the road for the 21st century," National Security Advisor Jake Sullivan said of Biden’s visit to South Korea, his first visit to Asia during his presidency.