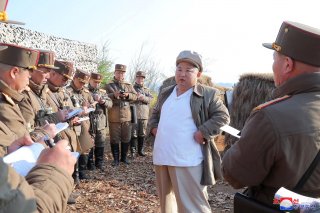 On Tuesday, North Korea blew up an inter-Korean liaison building on its own territory to emphasize how serious they were about severing communications with Seoul. The South Korean Defense Minister vowed that if Pyongyang took any military action against the South, his forces were prepared to “strongly respond.” North Korea’s actions, however, aren’t the moves of an aggressor, but expose the reality of their fear and weakness.

Washington should neither cower in fear nor engage in any talk of a “military option” in response to the North’s rhetoric–because our overwhelming conventional and nuclear superiority over Pyongyang keeps them deterred from launching unprovoked attacks.

North Korea has made a number of provocative threats since the beginning of June, recently severing all contact with South Korea. The reason should be clear: the sanctions continue to exert pain on North Korea and they are increasingly desperate for economic relief.  South Korean President Moon Jae In, however, is aware of the overwhelming military advantage Seoul and Washington have over Kim—Moon maintains a robust readiness to deter any offensive action from the North.

No one is more acutely aware of this fact than Kim, and he would never risk starting a war with the ROK-U.S. alliance he knows he could never survive. But that won’t keep some pundits in Washington from raising the alarm over North Korea. It’s been America’s default policy for decades.

In Senate testimony in July 2004, James Kelly, the Assistant Secretary of State for East Asian and Pacific Affairs, said the Clinton Administration’s “Agreed Framework” deal with North Korea had failed to stop Pyongyang from beginning a nuclear weapons program. The objective of Bush’s policy, Kelly firmly stated, was to obtain, “the complete, verifiable and irreversible dismantlement of the DPRK’s nuclear programs–nothing less.”

Bush’s policy failed, as North Korea tested its first nuclear weapon just two years later. In September 2016–after North Korea conducted its fifth nuclear weapons test–claimed, “The United States does not, and never will, accept North Korea as a nuclear state.” Obama’s statement predictably did not constrain Pyongyang’s behavior, as they tested their sixth and largest nuclear test just one year later.

In his first speech before the United Nations in 2017, Trump put just as much pressure on North Korea as Clinton, Bush, and Obama when he declared, “denuclearization is the only acceptable future” for North Korea, warning that if “forced” to, Trump would “totally destroy North Korea.” Three years after that warning, Washington is still are pursuing the same objective: the complete denuclearization of North Korea.

Trump has taken a lot of heat for his two personal summits with Kim Jong Un in Singapore and Hanoi and their mini-summit at the DMZ last summer. Trump’s overtures haven’t resulted in an improvement in U.S./North Korean relations because, like Bush and Obama before him, Trump still seeks the complete denuclearization of North Korea upfront. That policy will never be realized for one overriding reason: Pyongyang is concerned with regime survival and sees its nuclear arsenal as the single best guarantor of that outcome.

America’s overriding objective, therefore, is to recognize that reality and avoid an unnecessary war, either now or in the future. We most effectively accomplish that goal by anchoring our policies on the equally certain fact of our nuclear and conventional military superiority over North Korea, knowing we can deter them indefinitely. Then we should work with Kim, over time, via a step-by-step process, and in close coordination with President Moon, to deescalate tensions.

By working progressively towards the establishment of peace, normalizing relations with North Korea, and fostering the development of inter-Korean economic ties, we can progressively lessen the risk of war. Eventual denuclearization of the Korean peninsula can remain a goal, but with the recognition it will be a long-term aspiration.

The only way we lose is if we choose the foolish path of a badly misnamed “preventive war.” Banking on the reality that our existing military and nuclear forces will keep Kim deterred indefinitely, we can afford to take however much time is necessary to achieve peace.