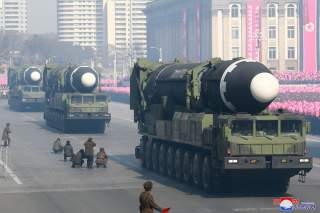 Over two weeks removed from a U.S.-North Korea summit in Hanoi that concluded without even a minor agreement to meet again, North Korean vice foreign Minister Choe Son-hui had some pointed remarks for the Trump administration during a March 15 news briefing in Pyongyang. While she notably left President Donald Trump out of her critiques, Choe tore apart his negotiating team as inept and insincere charlatans worried more about politics than making a mutually-acceptable deal. She accused Secretary of State Mike Pompeo and National Security Adviser John Bolton of deliberately sabotaging the talks with a hardline approach. She questioned why U.S. negotiators let a good opportunity slip from their fingers. And she was unapologetic about Pyongyang’s position, calling its demand for a relaxation of some of the most stringent UN Security Council sanctions a fair payment for the closure of the North’s Yongbyon nuclear research center.

Then came the kicker: Kim Jong-un, Choe said, may decide to suspend the talks with Washington altogether. “On our way back to the homeland, our chairman of the state affairs commission [Kim] said. “For what reason do we have to make this train trip again?” she told the room. “I want to make it clear that the gangster-like stand of the United States will eventually put the situation in danger. We have neither the intention to compromise with the United States in any form nor much less the desire or plan to conduct this kind of negotiation.”

Secretary Pompeo brushed aside the comments the next morning at the State Department, calling them all part of the song-and-dance of high-stakes diplomacy. Coming on the heels of a report in the Washington Post detailing confusion in the Trump administration about how it should proceed post–Hanoi and during a period of increased murmuring on Capitol Hill for additional sanctions on the North Korean economy, the current negotiations appear to be incredibly vulnerable to an irrevocably break.

Trump has three general options going forward. Option one would be to persist with what can best be described as the John Bolton model, where Washington continues to demand immediate, full, and complete nuclear disarmament from Kim in exchange for economic sanctions relief and diplomatic normalization later on. Option two would be the status quo, but with more sanctions slapped on the North Koreans in the hope that more restrictive banking measures and oil quotas will coerce Kim into desperately returning to the table in a far weaker position.

As was vividly demonstrated in Hanoi, the first choice is a road to nowhere—one that would not only eliminate whatever diplomatic opening was available but could very well result in a confrontation neither the United States or North Korea wants. The second choice will likely miss the mark too; as the latest comprehensive report from the Security Council panel of experts dutifully documents, the Kim regime is a master at sanctions evasion. Previous sanctions regimes on North Korea have been regarded as ineffective by UN monitors, and there is no evidence that more Security Council resolutions would be any more impactful on Kim’s wallet than the dozen that came before it (China can single-handedly render sanctions moot). Indeed, if Pyongyang can find loopholes in the three strongest Security Council resolutions enacted since 2017, then it can find loopholes in the fourth.

Fortunately, there is a third option.

For the past quarter-century, U.S. policy has been centered on denuclearization-for-peace. In this policy, the Kim regime can only have peaceful relations with the United States and become a full valve in East Asia’s economic engine if it gives up each and every last nut and bolt of its weapon of mass destruction program—including its chemical and biological weapons stockpiles. Successive U.S. administrations have operated on the same paradigm ever since the North Korean nuclear issue became a top U.S. national-security concern. The only difference across the Clinton, Bush, Obama, and Trump administrations is the negotiating tactics each administration has used to persuade North Korea to denuclearize.

There are a number of reasons for why this conventional paradigm has failed to produce lasting results. North Korea’s clandestine pursuit of a uranium enrichment capability during the Clinton administration was a big one. Clumsy U.S. implementation of the Clinton-era 1994 Agreed Framework was another. There have also been misunderstandings and misinterpretations when agreements have been reached; the 2012 Leap Day Deal collapsed after about a month over disagreements between the two on whether the launching of a space vehicle would constitute as a missile test.

But above all, the main impediment to the process has been the Kim regime’s unwillingness to disarm itself of a security blanket. While Kim Jong-un would most certainly like more prosperity for his country and more cash in his bank account, he isn’t willing to hand over his nuclear deterrent to get there. Viewed from Kim’s shoes, it’s not a mystery as to why: encased on all sides between much wealthier and powerful countries (most of which are adversaries) and a formidable U.S. military presence in Northeast Asia, voluntarily placing the North’s nuclear weapons arsenal on a silver platter is a downright nutty idea. Kim Jong-un never has the fate of Muammar al-Qaddafi far from his mind.

Rather than denuclearization before peace, the Trump administration should shake up the playbook and reverse the order. Just because the Kim regime will remain nuclear-capable for the foreseeable future does not mean the United States and its allies in South Korea and Japan should have a perpetually hostile relationship with the North. If Washington dealt with a nuclear-capable Soviet Union, China, and Pakistan with cordiality, then Washington can do the same with a nuclear North Korea.

This does not mean the United States has to accept Pyongyang’s nuclear status, its human rights abuses, its illicit arms sales, or its cyberhacking—none of which are conducive to acceptable international behavior. If U.S. security, political, or economic interests are directly at stake, then the Trump administration should not hesitate to defend them.

What this change in approach does require, however, is a Washington that is finally prepared to end its daily fixation on short or even medium-term North Korean nuclear disarmament at the cost of everything else, including an inter-Korean reconciliation process that—if taken to its fruitful conclusion—would lessen the hostility on the Korean Peninsula considerably.

President Trump could decide to walk away and return to sanctions and military threats, hoping that the same formula that fell short in the past will work in the future. Or he can be bold and assist South Korean president Moon Jae-in with his peace overtures while exploring the prospects of exchanging liaison officers with the North. Kim Jong-un may not be willing to denuclearize now, but it’s possible his calculations could change years down the line when some trust is established and relations with the North’s neighbors are more productive.

The Washington blob will contemptuously chide this approach as defeatist. But most of these criticisms will be made by the very same people who failed to solve the North Korea problem and have no other proposal other than polishing the old and rebranding it as new.

As a country infinitely stronger and more resourceful than North Korea, the United States can afford to wait for a denuclearized Korean Peninsula. What the United States should no longer wait for, though, is an end to seventy years of animosity.

Daniel R. DePetris is a foreign affairs columnist for the Washington Examiner and the American Conservative and a frequent contributor to the National Interest.