One Year After Singapore: Losing Ground on North Korean Denuclearization 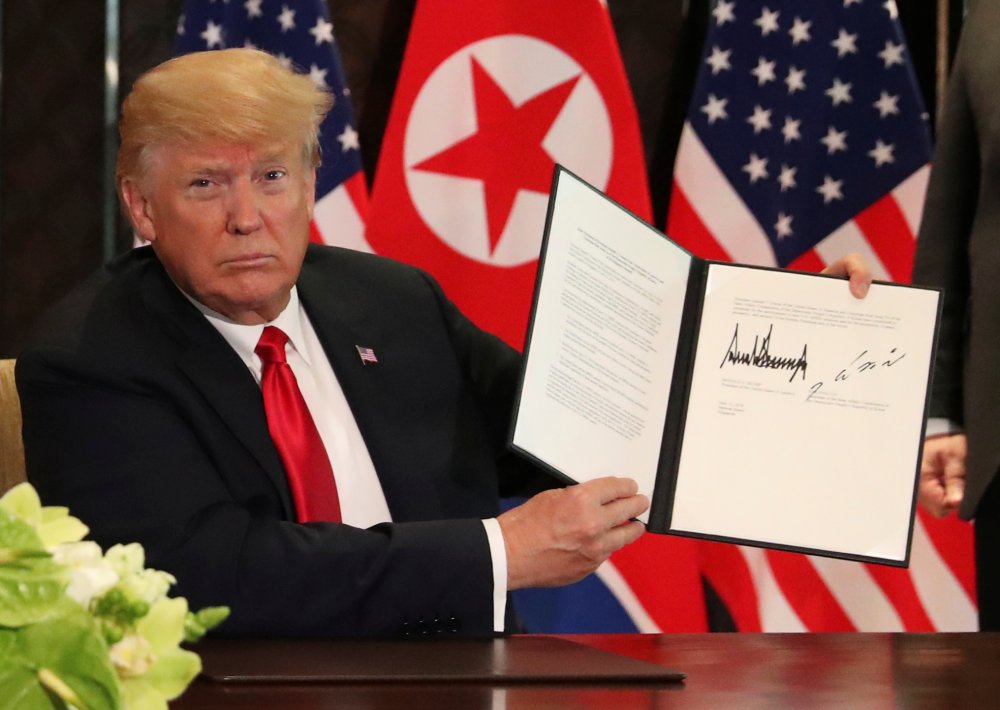 While the Singapore summit was historic as the first meeting ever between U.S. and North Korean leaders, it failed to produce any headway toward actual denuclearization. Some initially mistook the summit pomp as progress. Indeed, President Donald Trump euphorically proclaimed “there is no longer a nuclear threat from North Korea . . . I have solved that problem.”

Since Singapore, however, hope has given way to skepticism. It became apparent that the United States and North Korea remain far apart even on defining “denuclearization” let alone a process for achieving it. The Singapore summit—and subsequently the Hanoi summit—revealed that Kim Jong-un is no more willing to abandon his country’s arsenal than his father and grandfather were.

The United States had long been criticized for its unwillingness to have a summit meeting until an agreement had first been hammered out by diplomats. But Trump’s nontraditional, top-down approach has been no more effective in curtailing Pyongyang’s nuclear ambitions. Greater diplomatic engagement, including at the leader level, may simply have affirmed irreconcilable differences.

Pyongyang has now retreated back into self-imposed isolation, rejecting repeated entreaties by U.S. and South Korean diplomats to resume dialogue. The regime even dismissed efforts by South Korea to provide humanitarian assistance. It’s hard to have dialogue with a nation that doesn’t answer its mail or pick up the phone.

The Trump administration started off strong. In its first eighteen months, it sanctioned more North Korean entities than the Obama administration did in eight years. But like his predecessors, Trump has not fully enforced U.S. laws, including those protecting the U.S. financial system. For all its tough talk, the Trump administration’s maximum pressure policy was never maximum.

In 2018, Trump announced he would not sanction three hundred North Korean entities violating U.S. law and UN resolutions because “it would be disrespectful ahead of meeting with Kim” and “we’re talking so nicely” with Pyongyang. Nor did the administration take action against a list of twelve Chinese banks that Congress sent to the White House for money laundering concerns. In March 2019, Trump reversed U.S. Treasury Department sanctions against Chinese violators.

Trump’s blocking action will hinder U.S. law enforcement actions and undermine international efforts to pressure the North Korean regime to denuclearize. The decision to reverse plans to enhance sanctions enforcement reflects disarray in U.S. policy and raises doubts that the United States will impose additional sanctions as long as negotiations with Kim continue.

Trump’s effusive embrace of Kim Jong-un, who is on the U.S. sanctions list for human-rights violations, is at odds with U.S. efforts to isolate North Korea diplomatically. Since Singapore, the president has been reluctant to criticize Pyongyang’s crimes against humanity. The leaders’ close personal relationship was cited as the reason for not imposing additional sanctions.

Clouds on the Horizon?

President Trump currently defines his metric for success as a continuation of North Korea’s moratorium on nuclear and missile testing. Trump declared, “I just don’t want testing. As long as there’s no testing, we’re happy.” Trump downplayed Pyongyang’s recent launch of short-range ballistic missiles despite the secretary of defense, national security advisor, and the State Department all defining them as violations of UN resolutions.

But a lack of nuclear or long-range missile testing does not mean the North Korean threat has been diminished. North Korea continues to produce an estimated seven nuclear weapons per year. The regime also expanded its production facilities for fissile material, nuclear weapon reentry vehicles, missiles, and missile launchers. In January 2018, then-CIA Director Michael Pompeo declared North Korea was only a “handful of months” away from being able to target the U.S. homeland with nuclear weapons.

Kim Jong-un declared that his patience is not limitless. He warned that the regime will take stronger, though unspecified, measures by the end of the year if Washington does not adopt a more malleable negotiating position.

The U.S. currently conditions a third summit on working-level progress on a denuclearization agreement. However, in December 2018, National Security Advisor John Bolton commented that the lack of progress since Singapore affirmed the president’s view on the need for a second summit.

It is unclear whether the Trump administration would resume advocacy for a preventive military strike on North Korea if the regime resumed nuclear or ICBM testing. But it would certainly return the Korean Peninsula to a far tenser and less predictable status.