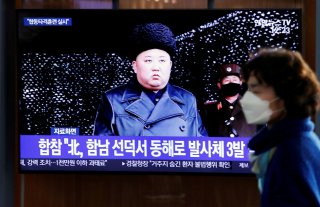 In Northeast Asia, the disruptive COVID-19 pandemic meets the intractable North Korea problem. Pyongyang is enduring the same wave of illness as its neighbors, but with a weaker economy and healthcare system. Nevertheless, the basic situation on the Korean Peninsula—a tense standoff between nuclear-armed and authoritarian Pyongyang and its US-backed democratic rival South Korea—will persist after the pandemic subsides. It is exceedingly unlikely that the COVID-19 crisis will force Pyongyang to change the direction of its security policy. On the other hand, it is highly likely the pandemic could push Pyongyang toward temporary tactical adjustments, possibly to include another peace offensive.

According to some reports, the virus “emergency” inside the Democratic People’s Republic of Korea (DPRK) and drastic countermeasures such as the closing of the country’s borders have caused serious economic disruption, including shortages of basic goods and skyrocketing prices. Kim has acknowledged weaknesses in his country’s health care system and said an outbreak in North Korea would have “serious consequences.”  There is little question the challenges of limiting the spread of the disease and caring for the seriously ill will badly strain DPRK capacity, even if analysts debate whether the regime is likely to defeat the virus or vice-versa.

For those expecting a collapse of the long-sputtering North Korean economy, possibly followed by the dissolution of the Kim regime, the pandemic may look like the final sharp blow that topples the entire rotten structure. But the regime has a history of demonstrating that reports of its demise are greatly exaggerated. The Kim family takes care of the military and of the elites in Pyongyang, incentivizing them to support the status quo. It ruthlessly crushes dissent. The suffering masses that might wish for a new government have little capacity to organize an effective resistance. We should recall that the regime came under no serious challenge even as the country suffered a famine during the 1990s that might have killed 5 percent of the North Korean population.

Neither is the pandemic sufficient to cause the Kim regime to choose a major course change such as seeking permanent rapprochement with Seoul or giving up its nuclear missile arsenal. The regime’s top priority remains its own survival, and it would cling to this goal despite a significant reduction in its population and a corresponding decrease in its economic potential. Whether it is a reflection of undying DPRK suspicion or a useful domestic political strategy for a regime that needs an external enemy to blame for its failures, Pyongyang’s hostility toward Seoul appears permanent, despite the occasional peace overture. The DPRK’s nuclear weapons and ballistic missile programs are the result of decades of effort, risk and sacrifice. Any weakening of the country’s ability to defend itself caused by the pandemic will make the nuclear deterrent even more valuable to the regime.

The pandemic might, however, prod Kim to pursue a thaw with Seoul, even if temporary. This month saw the DPRK resume rocket testing after a pause of three months. Seoul criticized the March 2 firings as provocative at a time when South Korea was suffering heavily from the COVID-19 virus. That criticism sparked a retort from Kim’s sister. Kim Yo-jong, the first ever public statement attributed to her, in which she called South Korea “senseless,” “foolish,” and a “frightened barking dog.”  The day after Kim Yo-jong's statement, however, Seoul reported receiving a letter from Kim Jong-un that reportedly conveyed “comfort” to the South Korean people and “unwavering friendship and trust toward President Moon [Jae-in].”

The apparent contradiction is perhaps less stark upon closer inspection. First, Kim Yo-jong's statement may have more to do with positioning her for a more senior political role within the DPRK regime than with setting the current parameters of North-South policy. Second, the content of her remarks was restrained: she suggested her criticism was not directly aimed at Moon himself, and she characterized the North Korean military exercises as defensive and a normal response to South Korean military preparations. That might indicate the DPRK plans a round of conciliatory behavior rather than intimidation. If so, Kim Jong-un's letter is more complementary than contradictory.

Kim and Moon can help each other. Moon’s popularity is at a low ebb and his party faces National Assembly elections in April. The appearance of progress in relations with North Korea would provide an electoral boost. Kim likely feels pressured to secure a fresh infusion of foreign economic or humanitarian aid and is more likely to succeed if he appears conciliatory.

The year 2020 will not be a period of high confidence in Pyongyang that facilitates bold external behavior. Outsiders might speculate that the pandemic creates a dangerous opportunity for North Korea to take an aggressive action while Seoul and Washington are distracted by internal crises. It is more likely, however, that Pyongyang has the same fear in reverse and is focused on surviving a period of extraordinary vulnerability rather than starting a war. That survivability is well-proven, and unfortunately will not require Pyongyang to give up its nuclear weapons.