The Politics of Korea’s Island Seokmodo 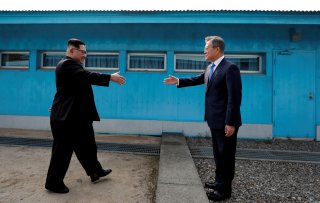 My hometown, Seokmodo, is a small island located on the west coast of Korea. The island is gifted with fertile soil with overflowing agricultural products and beautiful evening sunset that a person can see from the beach. Recently, however, our beautiful and peaceful island has attracted unwanted attention with unwelcome guests known as the leaflets criticizing the North Korean regime and plastic bottles used to send rice to North Korea. These leaflets and bottles were manufactured by the self-proclaimed human-rights activists. When the “activists” explained that the people of North Korea would starve without these bottles, our hearts were with them. Now, however, the plastic bottles are trapped in the nets laid by the island's fishermen. Not only do these bottles damage the net, but they also pollute the environment that we live in. Sometimes, fishermen had to cross the military security line to collect plastic bottles which would otherwise pollute the environment. Recently, the South Korean police have been dispatched to the island, as it is the center of a conflict between the “activists” and the local residents. The “activists” continue to insist that they must send these bottles and leaflets, while the residents argue that the bottles are a source of pollution.

The beautify island Seokmodo is also known as the border area between two Koreas. The border area includes three provinces, fifteen counties and cities, including Seokmodo. More than 2.6 million people live in the border area with North Korea, which means that one out of twenty South Koreans live along the border area. People living along the border area encounter soldiers and hear the loud sounds of artillery training day after day, which creates tension along the area. Even after seventy years since the start of the Korean War, we still live under tension. However, in 2018, we had a hope that we will be free from such tension as two Koreas were heading toward peace of the Korean Peninsula. Yet, recently, inter-Korean relations have returned to days of confrontation while the “activists” fly leaflets and plastic bottles to North Korea. The residents of the border area have to live with anxiety again.

On October 10, 2014, in Yeoncheon, Gyeonggi Province, the North fired anti-aircraft guns toward the leaflets, and in response, two Koreas exchanged fire. In addition, most of the leaflets and bottles sent from Seokmodo and other parts of the border area do not reach North Korea. Most of these items sent to the North are mainly found in South Korea, deteriorating the living conditions of border area residents, as they cause environmental pollution. Also, these leaflets contain indecent contents that are inappropriate for our children and that goes beyond criticizing the North Korean regime. Furthermore, these confrontations prevent tourists from visiting the island. Thus, the local economy, which has also been negatively impacted by the coronavirus pandemic has been further deteriorated and local residents are suffering from extreme loss.

Some activists groups led by North Korean defectors filed a lawsuit against the government that alleges preventing them from sending leaflets and bottles violates their “freedom of expression.” However, the Supreme Court ruled that freedom of expression could also be restricted for public safety, which means that one’s own freedom should not violate the freedom of others. The human rights of North Korean people matter, but the efforts to promote those rights should not take place at the cost of the lives and rights of border-area residents. These residents should not suffer the consequences of actions that do not actually promote the human rights of North Korean people.

There is a better way than leaflets to inform North Koreans about South Korea’s freedom and development. I have witnessed a gradual change in North Korean people’s perception of South Korea through the interaction of sports, culture and tourism. However, leaflets and bottles hinder such opportunities to improve inter-Korean relations and only create tensions between the two countries. I hope that the border area will one day be a place where South and North Koreans can communicate peacefully and freely come and go as neighbors, rather than a place of confrontation and conflict. I want to share the beautiful sunset of Seokmodo with North Korean people. The residents of the border area wish to bring peace to the Korean Peninsula and no longer endure unwanted leaflets and bottles.​​

Kim Yun-tae is a community leader in Ganghwado, Republic of Korea