Poll: Most South Koreans Are Wary of China While South Korean public opinion regarding the United States has received considerable attention, how does the public view China? Recent research we conducted suggests a broad suspicion and indicates that South Koreans favor a relationship with the U.S. rather than China.

Since the outbreak of the coronavirus, relations between South Korea and China have become increasingly nuanced and many analysts believe that South Korea is now being put in a position to more explicitly choose stronger relations either with the U.S. or China. In early 2020, more than half a million South Koreans signed a petition asking the government to ban visitors from China as the coronavirus began spreading throughout the region and South Korean businesses posted signs saying that Chinese citizens are not welcome. The two countries briefly put diplomatic meetings on hold, but in August, South Korea’s unification minister asked China to play a “constructive” role in inter-Korean talks, then praised China for their emphasis on bilateral cooperation. In October 2020, Chinese President Xi Jinping congratulated North Korean leader Kim Jong-un on the founding anniversary of the Korean Worker’s Party and stated that he intended to enhance North Korean-Chinese relations. In the same month, Chinese state media and netizens complained about remarks from a member of the K-pop band BTS regarding the sacrifices of Koreans across the peninsula as part of the Korean War, as they did not mention Chinese deaths in the war, seemingly ignoring that “they were fighting on the side of the aggressor”.

China likely views stronger South Korean-Chinese relations as a method of reducing the U.S. military and diplomatic presence in the region, especially as the deployment of the Terminal High-Altitude Area Defense (THAAD) potentially undermines Chinese security. South Korea thus finds itself caught between the improving relations with China and competing concerns, shared with the United States, about Chinese influence in the region. But do citizens feel the same way?

A 2019 Carnegie poll found that only 26.9% of respondents viewed China as a supportive partner in Korean reunification, while Pew surveys in 2019 and 2020 find 74% and 83% of respondents respectively have no confidence in Xi to “do the right thing regarding international affairs.” The negative views of China are at their highest in twelve years. Additionally, in a 2019 Asan Institute poll, 51.4% of South Koreans viewed China unfavorably and 60% perceived Xi negatively. In a 2017 poll, 62.3% of South Koreans characterized China as the most threatening country after inter-Korean reunification. While historically, the South Korean public viewed China favorably, China’s reaction to the THAAD controversy undermined South Korean perceptions of the country.

To address the South Korean public’s views on China, we surveyed 1,200 South Koreans in September 9-18, via a web survey conducted by the firm Macromill Embrain, using quota sampling based on age, gender, and region.

First, we asked respondents to view relations between South Korea and China on a five-point scale (very negative to very positive). For visual simplicity, we reduced this to three categories (negative, neutral and positive). Overall, 49.50% characterized relations as negative, with only 12.92% as positive. Disaggregated by party identification, we see that views sour as one moves right on the ideological spectrum: only 32.10% of supporters of the progressive Justice Party viewed relations as negative, compared to 46.39% for supporters of the ruling liberal Democratic Party (46.39%) and 60.14% for the conservative United Future Party. 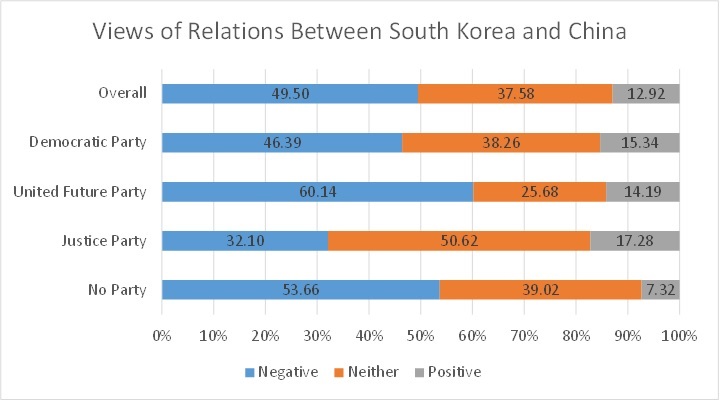 Next, we asked “Do you think that China’s influence on North Korea helps, hinders, or has no effect on Korean reunification?” Here, the overwhelming majority (84.92% overall) view Chinese influence negatively, again with views further souring as one moves across the ideological spectrum, from the Justice Party (71.60%) to the United Future Party (90.54%).

Lastly, we wanted to identify interest in improved relations with China as any move would likely damage relations with the United States. To address this, we randomly assigned respondents to one of two prompts.

Version 1: Do you support closer relations with China?

Version 2: Do you support closer relations with China even if it strains U.S.-Korean relations?

Overall, we find a majority supportive of closer relations (56.00%), but support drops to only 39.33% when closer relations may come at the cost of relations with the United States. Again, we see less interest in China as one moves from progressives to conservatives, yet across the board, we see declines in support if improving relations with China would affect U.S. relations. In the same survey we asked respondents about their support for the U.S. military and a majority of South Koreans (51.59%) believed that America’s continued military assistance was crucial to South Korean security, while those supportive of the U.S. military bases clearly outnumber those that oppose (46.25% vs. 16.92%). The results suggest that most South Koreans are in favor of a strong partnership with the United States, emphasizing the benefits of a military alliance, even if they would be interested in findings ways to improve relations with China. 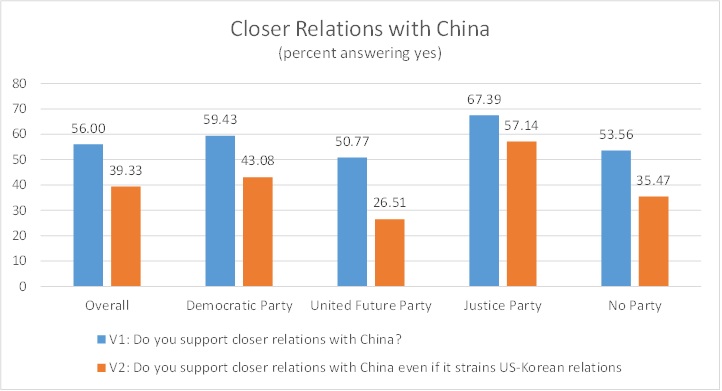 What does this tell us? Overall, we see continued pessimism about China. As long as China continues as North Korea’s political and economic lifeline and continues to prefer a North Korean buffer state rather than be a catalyst for peaceful reunification, public views are unlikely to improve significantly. Nor should we expect growing economic relations to overcome public concerns about Chinese political ambitions in the region. However, the results also suggest interest in improving relations as long as they do not damage U.S.-South Korea relations. Overall, the opinions of South Korean citizens suggest the durability of relations with the United States and that U.S. officials may wish to emphasize the benefits of these relations as a means to limit public support for China.

Timothy S. Rich is an associate professor of political science at Western Kentucky University and director of the International Public Opinion Lab (IPOL). His research focuses on public opinion and electoral politics, with a focus on East Asian democracies.