Pukkuksong-5: Why North Korea's New Solid-Fuel Missile Is a Problem 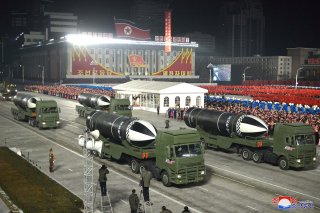 North Korea recently displayed its new “Pukkuksong-5” (Korean for Polaris-5) submarine-launched ballistic missile (SLBM) for the first time, in a mid-January parade marking the conclusion of its Eighth Party Congress. Though this missile appears to be only an incremental change from the “Pukkuksong-4” displayed in October 2020, and we cannot even be sure this design is ready for its first test, it is a sign of continuing progress in North Korea’s missile programs. If this new missile or a similar model is flight-tested—a very real possibility in the coming months—it is likely to enable North Korean progress on two important pathways: toward a solid-propellant intercontinental ballistic missile (ICBM) that could reach the United States, and toward missiles that can deliver multiple nuclear warheads with a single launch.

Given how relatively little progress North Korea has made in its nascent ballistic missile submarine program, it is wise to be skeptical of the military significance of a new SLBM. North Korea has not yet deployed its first ballistic submarine with more than a single ballistic missile launch tube. Even once it added a new submarine with a few launch tubes to its fleet, this would still represent only a tiny fraction of North Korea’s launchers in comparison to the huge investment. However, this missile’s importance clearly extends far beyond its potential use from a submarine.

Given the military advantages of solid propellant, the progression and testing of the Pukkuksong series probably will prove much more important to the future long-term growth in North Korea’s capabilities than the liquid-fueled Hwasong series that garnered so much attention from launches in 2017. Missiles using solid propellant are superior for most military uses than their liquid-fueled equivalents.

All other things being equal, a missile force armed with solid-propellant missiles is more flexible, responsive, sustainable and survivable than one armed with liquid-propellant systems. Solid-propellant missiles can be fired with much shorter preparation time, making them more effective for surprise strikes and for avoiding an adversary’s efforts to find and destroy the launcher before it can fire. Operationally, dispensing with the need for fueling makes prolonged deployments out of garrison to fire multiple missiles more practical, and makes the deployed battery of missile launchers and support vehicles less vulnerable to attack or detection. The additional vehicles full of volatile propellant present fragile targets, consume more fuel, add to maintenance requirements, and increase the signatures of a deployed missile battery.

However, despite the advantages, there are some drawbacks—most notably that casting increasingly larger solid-propellant motors, required for missiles of increasing range, is not easy to do with the consistency required. So far, North Korea has not yet proven it can make viable solid-propellant missiles of intermediate range, much less ones that can match the range of the liquid-fueled ICBMs tested in 2017.

However, simply because it is difficult does not mean that North Korea will not eventually be able to build solid-propellant ICBMs. If these could be proven reliable and fielded in sufficient numbers, solid-fuel ICBMs would be a major step forward for North Korea’s military, presenting the potential for a robust and prompt North Korean “second strike” capability from mobile land-based launchers. “Second strike” capability is essentially the pinnacle of nuclear deterrence, meaning that a country, even after suffering an initial all-out attack from an adversary (a “first strike”) can still retaliate against the adversary’s homeland with nuclear weapons to inflict unacceptable losses.

In practical terms, solid-fuel ICBMs, more easily hidden and protected—with no requirement to be fueled before launch—could pose a far more viable threat of rapid retaliation against the continental United States. Though liquid-fueled ICBMs could play a “second strike” role if hidden in underground facilities, conventional wisdom suggests that such units would be less likely to remain operational and return fire before they or their fueling support are destroyed.

As a result, a solid-fuel ICBM force could provide Pyongyang with greater confidence in its ability to drive a confrontation while maintaining control of escalation. It could keep such missiles more safely in reserve as the ultimate threat to deter the US from ending the regime. Therefore, North Korea’s fielding of solid-fuel ICBMs would pose an expanded threat to regional stability and US interests, even if the odds are remote that North Korea would use them to strike the United States.

Given these potential advantages, it should come as no surprise that North Korean leader Kim Jong Un gave implicit and explicit direction to further develop solid-propellant missiles at the Party Congress. An official summary of his remarks to the Congress included the task to “push ahead with the development of solid-fuel engine-propelled inter-continental underwater and ground ballistic rockets as scheduled…”

Though we have no way of knowing for sure what schedule Kim is referring to, we should keep in mind the context of his remarks. Party Congresses are now planned for every five years—associated with evaluating and preparing “five year plans.” Therefore, the phrase “as scheduled,” instead of the vaguer phrases used elsewhere in his remarks, likely signals that Kim intends to develop a solid-fuel ICBM within the next five years. Whether or not this timeline proves to be feasible is another question, but it certainly suggests that North Korea is planning an ambitious program of building and testing increasingly larger solid-propellant missiles—like the Pukkuksong-5—over the next five years.

Kim Jong Un also reported at the Congress that North Korean national defense scientists were at the final stage of “perfecting the guidance technology for multi-warhead rocket”—almost certainly a reference to what western militaries refer to as multiple re-entry vehicles. (A re-entry vehicle, or RV, carries a warhead through atmospheric re-entry to its target.) The technology to put more than one RV on a missile is referred to in its basic form as MRV (multiple re-entry vehicle) capability, but is better known in its more advanced form as MIRV (multiple independently-targetable re-entry vehicles)—wherein each RV can be directed to a different target. Demonstrating such capabilities would be a major step forward for the credibility of North Korea’s threat to the United States, despite US missile defenses.

Besides advancing North Korea’s solid fuel program, a launch of a Pukkuksong-5 could be used for North Korea’s first MRV or MIRV test. MRV technology, already in use in the 1960s, is probably within reach for North Korea, and even the initial test of a MIRV should not be ruled out.

A quick comparison between the Pukkuksong-5 and the US Polaris A-3 SLBM, the first MRV-equipped missile ever deployed, should be illustrative of this potential. The Polaris A-3 carried three RVs, each with a nuclear warhead of 200 kilotons yield, in a missile less than 1.4 meters in diameter and 10 meters in length. The Pukkuksong-5 is significantly larger—approximately 1.8 meters in diameter and 10.5 meters long.

In addition, with the extended payload shroud at the top of the Pukkuksong-5, its shape looks more suited to carrying multiple RVs than its predecessors, and is quite similar to the Polaris A-3. This resemblance may even be an intentional effort by North Korea to signal that this missile is MRV-capable. The shroud appears painted in a nearly-identical black and white pattern as historical photos of A-3 test launches—admittedly also a practical pattern for tracking the behavior of the missile in flight.

Though the first launch of the “Monster Missile” ICBM displayed in the October 2020 parade cannot be ruled out in the near future, a launch of the Pukkuksong-5—presuming it is ready for testing—might better suit North Korean leader Kim Jong Un’s political and technical goals for now.

Kim may gamble that, because the Pukkuksong-5 is not an ICBM, he would face little or no consequences for launching it or something similar. He may believe that such launches would not derail any prospects for advancing his diplomatic agenda—even while they helped to advance the goals he has set out for his weapons programs. Given how North Korea’s numerous launches of solid-propellant missiles, including an SLBM, were downplayed by Washington in 2019 and 2020, it would be hard to blame Kim for having that impression.

The United States, with the help of the international community, should make it clear that this would be a bad bet. Even though the Pukkuksong-5 is not an ICBM, its clear potential to help North Korea advance toward multiple RV and solid-propellant ICBM capabilities means that testing it should be considered a level of threat to the US that is tantamount to testing an ICBM.

Markus V. Garlauskas led the U.S. intelligence community’s strategic analysis on North Korea as the National Intelligence Officer for North Korea from July 2014 to June 2020, after serving in U.S. Forces Korea for twelve years. After the end of his term in the Senior National Intelligence Service, he joined the Scowcroft Center for Strategy and Security of the Atlantic Council as a nonresident senior fellow. He also teaches a graduate course in strategic analysis of North Korea for Georgetown University’s Security Studies Program. Follow him on Twitter: @Mister_G_2.