Question: What Direction Do You See U.S.-North Korea Relations Heading in For the Rest of the Year? 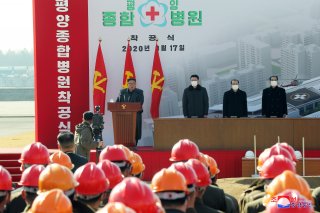 Looking at the situation in the United States, given the coronavirus crisis, it is hard to foresee any significant change in U.S.-North Korean bilateral relations. It would be difficult to plan for another summit meeting in the current pandemic-focused world, even though it was suggested at the beginning of this year. It is hard to imagine how the American public would react if President Donald Trump were to leave the country in both a time of crisis and in the middle of presidential election season.

However, coming closer to the election, if Trump feels the need to show the voters a win, he might opt for a summit with North Korea’s Kim Jong-un. Since 2018, we know that the administration is very flexible when it comes to organizing a summit in a mere three-month period. But I would still rate the possibility of another summit as low, as North Korea’s leadership would also have a say in any plans related to a summit.

Looking at DPRK’s motivation to meet with Trump, there are two possible trajectories. In the first case, the idea of a summit would require Kim Jong-un foreseeing Trump as U.S. president for the next four years and being able to bring benefits to his country. The DPRK can evaluate how the summit could be reflected at the voters’ behaviour and decide upon that.

Alternatively, in the second case, as the previous two summits and meeting at the DMZ did not really bring any real benefit to the DPRK, the motivation for another such event would be low—especially when Kim got more out of meetings with Chinese president Xi Jinping.

Another factor that could play a role in the DPRK leadership’s calculations is the timing of Kim Jong-un leaving the country for another summit (provided Trump is not able or willing to travel to Pyongyang), especially after the last round of rumours about his health issues and spots on his hand seen during his public reappearance on May 1.

Then there are considerations for lower level meetings. Currently it is difficult to judge how welcome Secretary of State Mike Pompeo would be in North Korea, given the most recent wave of criticism coming from Kim Jong-un’s sister, Kim Yo-jong. As for regular diplomatic meetings, there is currently a lack of information about to what extent the State Department uses the UN New York channel to talk to DPRK representatives, or what the state of Track 1.5 and 2 diplomacy meetings are.

At this point, I do not see a reason why the DPRK would conduct an ICBM nuclear test. In general, with previous tests they have either tried to attract the attention from the rest of the world, mainly the United States, and secure some benefit out of the whole affair, or, as was the case in 2017, testing to achieve a certain level of development and strengthen Kim Jong-un’s position internally.

A possible reason for testing is the September 9 anniversary of the country’s founding. However, again, the possible benefits of testing would need to be considered. Such a test could, for example, negatively impact Trump’s chances for re-election, as it will show to U.S. voters that the president’s only sort of foreign policy success—the positive relation with Kim—was anything but that.

However, we need to take into consideration the DPRK’s internal development factor in making a decision about testing. Here it would depend on how well the rumours regarding Kim’s health were contained in DPRK—it was reported that people did get some information about international news in April. A test, either of an ICBM or nuclear warhead, could be conducted in order to reassure North Korean people and some parts of the elite about the strength and decisiveness of the leader.

Naturally, looking at the existing pattern in nuclear testing, it is very possible that there would be a nuclear test sometime after the U.S. election in November or in the first half of 2021, regardless of who wins the election and is sworn in.

How will Trump seek to engage Kim—or not?

As suggested above, it is unlikely that President Trump will choose to engage Kim Jong-un as a possible part of his re-election strategy. However, that could change, depending on the polls and is not an important part of the presidential campaign. But I do admit that the president could use the Kim Jong-un card in an attempt to improve his chances.

Lucia Husenicová is lecturer at the Department of Security studies at the Faculty of Political Science and International Relations at the Matej Bel University. She is also a director of the Institute of Asian Studies.