The Real Reason Negotiations Between America and North Korea Are Stuck 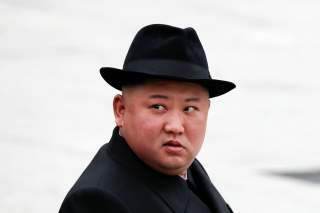 American-North Korean negotiations are at a stalemate. United States President Donald Trump met North Korean supreme leader Kim Jong-un twice—once in Singapore in 2018, and once in Hanoi in 2019. Neither summit returned much empirically. There was much goodwill expressed, a few minor swaps struck, and a lot of general relief that the two sides were talking rather than threatening each other as in 2017.

But there has been almost no movement on the core strategic issues, defined as nuclear warheads, the missiles to carry them, and the launchers from which to fire them. Denuclearization has not occurred, nor does it appear to be imminent. After the failure of the Hanoi summit a few months ago, no one really quite knows where the process stands. U.S.-North Korea engagement seems to be drifting. There may yet be a third Trump-Kim summit, but after two summits with little to show for them, expectations should be correspondingly low for any further meetings.

America’s natural impulse is to pin the blame for this on North Korea. And indeed, one could plausibly argue that Kim came to these meetings in bad faith. At Singapore, it was quite obvious that North Korea’s emphasis was on the symbolism of it all. In the run-up to the summit, the North dragged its feet in the technical groups for the final statement, while deeply stage-managing the presentation. At Hanoi, Kim suggested a preposterously one-sided bargain— near-full sanctions relief in exchange for the deactivation of one aging nuclear production facility. Trump was broadly, and correctly, applauded for rejecting this ‘bad deal.’

But it is also the case that the Americans offered North Korea pretty poor deals at both summits too. At both meetings, the Americans demanded huge concessions from the North Koreans upfront, in exchange for vague future counter-concessions. In the run-up to Singapore, U.S. officials regularly talked about the complete, verifiable, irreversible disarmament (CVID) of the North Korean nuclear and missile program. By Hanoi, this had morphed into final, fully verified disarmament (FFVD). Effectively, however, these were the same thing—unilateral disarmament.

Yet in exchange for this massive concession, the Americans never offered anything commensurate. The U.S. variously hinted at counter-concessions such as a peace treaty to end the Korean War (in the place of the current, less-binding armistice), sanctions relief, diplomatic recognition, aid, vague security guarantees, and so on. These are valuable to North Korea, of course, but none of them seriously measure up to the value of North Korea retaining its nuclear warheads and missiles.

North Korea is a pariah. It is heavily sanctioned. It is surrounded by countries with little sympathy for it, if not open hostility. Other than a highly opportunistic relationship with China, the North has no allies. It basically stands alone in the international system, feared, distrusted, and loathed. For such an isolated country, nuclear weapons are an excellent strategic choice. They offer near-absolute regime security against external attack.

Kim appears to be a negotiator. Unlike his father, he genuinely seems to want to bring North Korea in from the cold, at least a little. He seems to want a more stable, less fraught relationship with the region, where North Korea is at least somewhat accepted as a normal state. So he may, in fact, be willing to give up some of his nuclear warheads and/or missiles. He almost certainly will not give them all up—CVID is a fantasy—but he may be willing to give up some of the program.

But the warheads and missiles are extremely valuable. They give North Korea long-sought regime security against its many opponents. They also cost a large fraction of North Korea’s very small GDP to make, and Pyongyang has sought them for almost fifty years. The North even wrote its nuclear weapons into its constitution as a point of national security and pride.

As such, the North simply will not surrender them—even some of them—without very serious counter-concessions from the Americans. Such concessions would include ending the U.S. alliance with South Korea; removing U.S. forces from South Korea; removing U.S. air and/or naval power from the South; sanctions relief and a huge aid package; full normalization with South Korea, the United States, and Japan; shrinking the size and/capabilities of the South Korean military; and so on.

All of these are large, politically painful concessions from the U.S.-South Korean side, which no one wants to make. So Washington does not debate such possible concessions; instead, American policymakers just keep demanding CVID over and over again—and the North keeps saying no. At best, America is willing to append some vague talk about North Korean modernization or U.S. security guarantees. But the North Koreans are not stupid. They will not surrender something as valuable as nukes without something really valuable and directly tangible in return.

So it is a mark of how unserious the U.S. debate is on North Korea, that there is almost no discussion in the administration, Congress, or U.S. op-ed pages on what painful, upfront, tangible concessions America might make. Is it worth it to trade U.S. air wings in South Korea for twenty North Korean warheads? Maybe thirty? If the North Koreans will surrender 80 percent of their missiles in exchange for the closing of all U.S. bases in South Korea, would that be a good deal? Maybe should try to buy North Korea’s nukes from them? Would a cash-for-nukes deal be a good one? Or are these deals all so bad, that the status quo is preferable?

That no one is even talking about these types of deep, painful swaps in the United States is a bright red flag that Washington is not serious. Instead, policymakers just keep demanding and demanding that North Korea give their weapons away. Of course, they will not, and so America is stuck. Fifteen months of negotiation has generated no progress because the Americans can not bring themselves to countenance a genuinely painful concession. So the North Koreans give Washington nothing real in return, and here we are, at that same place everyone started.