Recent Development in North Korea Could Create a Window of Opportunity 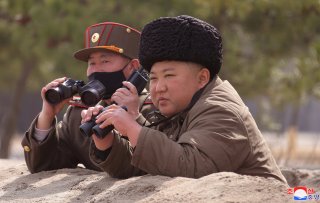 Two truths regarding U.S.-North Korean relations are clear over halfway into 2021. First, relations with North Korea are much less amicable than they were under President Trump. Kim Jong-un called his relationship with President Trump “special.” In contrast, North Korea’s “Central News Agency” has called President Biden “an imbecile.” In mid-March, Kim Yo-jong, Kim Jong-un’s sister, accused President Biden of being more aggressive than Trump by deciding to resume military exercises with South Korea, in contrast to Trump’s move to suspend them. Second, probably because of the progress made under the previous administration, the hostility has not reached the place that it was under President Obama. Is there an opportunity in the current situation?

In recent weeks, there have been all kinds of rumors surrounding Kim Jong-un’s health and an apparent government shake-up. Some experts have discussed these events in isolation of each other. However, those with the acumen of the finest negotiators realize that North Korea’s actions are best understood in conjunction with one another.

First, in a speech in April before the Workers Party, Kim warned of an “arduous march” ahead, which is the same language he used when he was leading the nation through the famine of the 1990s.

Second, just the other day Kim Jong-un dramatically reshuffled his senior leadership. This was evident in the alignment of the nation’s leaders on the National Memorial Day commemoration at Kumsusan Palace of the Sun in Pyongyang, North Korea. A few of the nation’s highest leaders, most notably military and organization leaders, were placed farther back in the lineup. Most notably, Ri Pyong Choi, a top military official who was in charge of certain dimensions of the nation’s nuclear weapons program, is a few rows back in the ceremonial leadership arrangement. Moreover, Choi is dressed in civilian clothes rather than military clothes. Previous to the gathering, Kim had reproved his leading officials for taking irresponsible and foolish actions leading North Korea into the current “great crisis.” The crisis that the head of state is referring to is likely due to a confluence of factors that include the coronavirus and the famine that has engulfed the land, that the North Korean “supreme leader” blames on last year’s typhoon and flooding.

Third, during a continual series of public appearances, Kim clearly has lost a good deal of weight. This fact is especially noteworthy because North Koreans like their leaders to be plump, believing it to be a sign of health and prosperity. Some people have therefore speculated that Kim is in very poor health. However, one indication that he may not be in extremely poor health is that he is allowing news commentators to discuss his weight loss. Technically, allowing these public interactions could be intended to cover up a possible perception that Kim’s health is in decline. However, it is probably more likely that the conclusion that the commentators generally arrive at, that their leader is sharing jointly with the suffering of his people, is precisely the message that the North Korean leader wants to convey to the nation’s citizenry. It may also be that Kim’s health is somewhat poor rather than extremely poor, and that his weight loss is designed to improve his condition, especially because some of his health issues put him at greater risk of a serious bout with the coronavirus, as well as having a shortened life span.

Recent Developments Could Open a Door to Opportunity

Kim realizes his approach must be “first things first.” He must address the severity of the trials of his people before he brandishes his nuclear weaponry before the United States, Japan, and North Korea. The coronavirus has been a source of great anguish in North Korea. It may be that one act that the United States can do to set the stage for more talks with North Korea is to supply coronavirus-related relief and assistance to the beleaguered country, either directly or indirectly through South Korea.

Another door of opportunity could emerge from North Korea’s recent prioritization of its economic woes ahead of its emphasis on becoming a formidable military force. Although North Korea wants American economic sanctions lifted and the United States has asserted that it can do that only if the Korean peninsula is totally denuclearized, North Korea’s dire economic situation could lead to a more reasonable gradualist approach, employed by Henry Kissinger and President Tonal Reagan during the Cold War era.

There is a third door of opportunity as well, that is probably the most obvious one. That is, the meetings former President Donald Trump had with Kim Jong-un provided a certain degree of momentum that must not be lost, especially in the name of simply doing the opposite of what the previous political party did.

Whatever the developing situations at this time in North Korea, this is not the time for America’s leaders to sit and watch. Rather, it is a time to embrace the opportunities and seek to move relations with North Korea forward rather than, by lack of inertia, to allow the situation to go backward.

William Jeynes is a professor at California State University at Long Beach and a senior fellow at the Witherspoon Institute at Princeton.