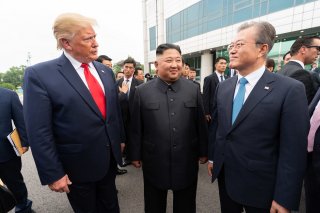 Every morning, the two Koreas start the day with a short phone-call through the liaison office. The calls aren’t particularly substantive, but the fact that the two bitter enemies were at least exchanging words (however brief the conversations were) to make sure the phone lines were working properly provided some degree of faint hope that direct channels of communication were available.

June 8, however, was different. When South Korean officials dialed up that morning, the North Koreans let the phone ring off the hook. It was an inauspicious beginning to a day that would eventually conclude with an official announcement from the Kim regime that the phone links and hotlines established by the 2018 inter-Korean agreements would no longer be in use. Referencing Kim Yong Chol and Kim Yo Jong by name, the North declared “instruction to completely cut off all the communication and liaison lines” with the South Korean authorities—including the military-to-millitary channel created to limit a catastrophe between the two sides. Sure enough, the next morning, the order was implemented like clockwork.

“We have reached a conclusion that there is no need to sit face to face with the South Korean authorities and there is no issue to discuss with them,” the KCNA would add in a report. Translation: if you, President Moon Jae-in, truly want dialogue, then you need to stop following Washington’s lead. Otherwise, your grand inter-Korean peace initiative is as dead as disco.

While Pyongyang’s decision to cut communication with the South may seem sudden, it was actually predictable given the North’s behavior over the previous 12 months. As Chad O’Carroll points out, the Kim regime has been downright nasty to the Moon administration and continues to reject every offer the South conjures up. From its refusal to accept South Korean food aid in September 2019; calls from Kim himself to destroy South Korean infrastructure at the Kumgang tourist resort’ and the North’s juvenile decision to not broadcast a South Korean soccer match, the last year has been a cacophony of humiliation for the South. It’s especially humiliating for Moon, who continues to see the virtues and mutual security benefits of reconciliation but is nevertheless struggling to move his policy forward given the Trump administration’s short-leash.

The severance of the inter-Korean phone-lines is an unfortunate byproduct of a year of missed opportunities and stubbornness in both Washington and Pyongyang to meet one another half-way. Despite the magic summitry that took place in 2018, U.S.-North Korea nuclear negotiations are for all practicality in comatose. No amount of warm words or letter-writing at the leadership level do much if the bottom line positions of the two sides are immovable. The dynamic between Washington and Pyongyang remains the same today as it has been since Kim Jong-un’s father ordered North Korea’s first underground nuclear weapons test in 2006. U.S. policy on North Korea resembles a large, dark cloud, with denuclearization blocking out every other priority on the Korean Peninsula. Pyongyang’s policy has gotten increasingly more hardline as the months of inaction have gone by; it could very well be that the offer Kim made in Hanoi, Vietnam, nearly 16 months ago is no longer on the table.

Pyongyang’s shuttering of communication links with the South sounds serious, but it’s not as if the phone-lines were doing much to move the conversation forward. The personal link between Kim and Moon was never used. Senior North Korean officials walked out of the liaison office in protest last year; yes, the electricity was still on and the office may have been operating, but there isn’t much lower-level diplomats can do if their bosses are either unable or unwilling to guide the conversation in a productive direction.

At its core, the stoppage of the phone calls is more worrying for what it represents: the near-death of Moon’s signature foreign policy initiative. Time will tell whether the North Koreans are seeking to pressure Seoul into making additional concessions or whether, as seems likely, they’ve made the strategic calculation that engaging with the South is a waste of time as long as Washington holds a veto over South Korea’s policy.

Daniel DePetris is a fellow at Defense Priorities, a foreign policy organization focused on promoting a realistic grand strategy to ensure American security and prosperity