Singapore Summit at Two: Where Did North Korea and America Go Wrong? 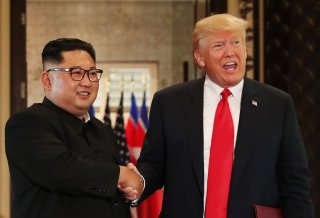 June 12, 2018 was a seminal moment in the history of U.S.-North Korea relations.

Here were two men, Donald Trump and Kim Jong-un, making a personal attempt to strike a positive relationship for the benefit of their two countries. Never before in the nearly 70 years of mutual hostility did a U.S. president and a North Korean supreme leader even dare to contemplate stepping foot in the same room. And yet Trump and Kim, two peas in a pod, were not only willing to explore the option—they actually went through with it.

After the two signed a non-binding joint statement after their summit promising that “the establishment of new U.S.-DPRK relations will contribute to the peace and prosperity of the Korean Peninsula and of the world,” Trump took in the moment with his own press conference. "My meeting with Chairman Kim was honest, direct, and productive,” he told reporters. "We got to know each other well in a very confined period of time, under very strong, strong circumstance. We’re prepared to start a new history and we’re ready to write a new chapter between our nations.”

At first, it looked like Trump’s personal gamble with the North Korean leader could pay off. The Kim regime, which has a disturbing habit of imprisoning visiting Americans on spurious charges of espionage, released the last three Americans in their custody as a goodwill gesture a month before the Singapore summit. Pyongyang began to transport the remains of U.S. troops killed during the 1950-1953 Korean War to U.S. custody, a move trumpeted by the president as a significant accomplishment. The U.S. military drills with South Korea that consistently rile the North were postponed or canceled outright—the Ulchi Freedom Guardian was canceled in June 2018, Key Resolve and Foal Eagle were scotched in March 2019, and Vigilant Ace was put on the backburner in November 2019.

All of these concessions were meant to lay the groundwork for a tough but healthy and necessary exchange of ideas at the negotiating table between two adversaries who have spent the last 7 decades scratching and clawing at each other. What they could not do, however, was heal the deep psychology wounds that have so often hobbled the relationship and remain major impediments to progress today.

On the second anniversary of that historic Trump-Kim summit in Singapore, bilateral relations have barely moved. As the months went by without progress on the core issues—for Washington, ending North Korea’s nuclear weapons program; for Pyongyang, ending the U.S. “hostile policy”—both parties began to revert to their old, antagonistic ways. The North Koreans, aggravated that Trump’s rosy words of a new relationship weren’t translating into reality, resumed the testing of short-range ballistic missiles (since May 2019, the North has conducted 18 separate missile and ground-based weapons tests). Trump tried to play down the tests as ordinary military exercises that every country performs on a fairly regular basis. But with each short-range missile that was launched, the groveling in the commentariat got louder and the skepticism within the U.S. national security establishment about North Korea’s intentions became more pronounced. Combined with Washington’s tendency to assume the very worst about North Korean behavior, the weapons tests—in addition to the bomb-throwing remarks from senior North Korean officials—had the effect of reconfirming to many in foreign policy community a series of long-prevailing assumptions: the Kim regime is inherently evil and sees concessions as weakness; Pyongyang is a monstrous state run by an irrational cult; and the North has never been, and will never be, serious about diplomacy.

The North Koreans have their gripes too. Foreign Minister Ri Song-gwon’s June 11 diatribe against the United States lays them out in vivid detail. Justified or not, Pyongyang looks back at the last 2 years as a complete and utter waste of time and effort. The Kim regime feels taken advantage of by Washington—not necessarily because the U.S. has not changed its position, but rather because President Trump is treating North Korea as a prop in his re-election campaign. In the North’s view, they have been remarkably restrained in their missile activity despite the Trump administration taking no action whatsoever on sanctions relief; no steps towards improvement of the overall relationship with the exception of a few, cordial letters from Trump; and no moves at all towards the establishment a mutually-agreeable peace regime on the Korean Peninsula. While the State Department continues to state that Washington is "willing to take a flexible approach to reach a balanced agreement,” the Kim regime does not buy what the administration is selling and considers these comments as even more evidence that the U.S. talks a big game but takes very little, if any, actual action to meet its own rhetoric. “The U.S. professes to be an advocate for improved relations with the DPRK,” Ri said in his statement, “but in fact, it is hell-bent on only exacerbating the situation.”

Two years removed from the highly publicized Singapore jamboree, Washington and Pyongyang are no closer to realizing the objectives outlined in their joint statement than they were before Trump and Kim strolled in the garden and spoke to reports together. It is an entirely depressing reality for those of who want to see the Korean Peninsula turn into what South Korean President Moon Jae-in calls a zone of peace. If we have any hope of getting there, both sides—the United States and North Korea—will have to break the shackles of the status-quo, however politically dicey this type of bold reform will be.