To Solve North Korea, Joe Biden Must Learn A Lesson From Donald Trump 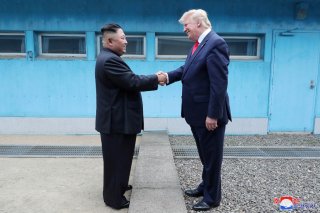 There is an old saying—as old as when I invented it just now—that changing the direction of American foreign policy is like ordering a gourmet meal at the McDonald’s drive-thru window: it is a lot easier to issue the order than it is to get the results you wanted.

That wise axiom seems likely to characterize the North Korean policy of a Joe Biden presidency. We can expect loud and dramatic calls to chart a new course, serious efforts to implement them, intense media and political scrutiny, and, in the end, a product that resembles the same un-Happy Meal that has been provided for decades.

Biden has clearly articulated at least a general vision for his North Korean policy, one that offers a clear break from that of his immediate predecessor and instead embraces a more familiar approach that harkens back to his predecessor’s predecessors. The personal diplomacy and love-letters would stop. In their place would likely be a combination of traditional methods: economic sanctions; regional alliance-building centered on Japan and South Korea; pressure exerted on China to force the North to engage or at least show restraint; and a “carrot and stick” approach designed to encourage denuclearization through an incrementalist approach. Much like Biden himself, it won’t be particularly dashing or original. But, much like Biden himself, it will also seem familiar and reliable.

Unfortunately, the methods of the past didn’t work very well when they were first adopted, and there is little reason to expect them to work much better in 2021. Biden’s approach and style may break with Donald Trump’s, but his results will likely be just as limited. Economic sanctions mean little to a nation like North Korea whose leaders regularly use nefarious tools to generate personal income and don’t care if their own people suffer. Serious military threats are simply not credible, considering the North’s current arsenal and its proximity to Seoul and Tokyo. Promises of economic development ring hollow to a leadership that deplores the idea of a property-owning middle class. The chaotic state of the contemporary world and America’s fallen standing within it likely rule out any coordinated international effort against the DPRK. And China has much less influence in Pyongyang than many American policymakers seem to think.

Solving the problem of North Korea will thus require someone who combines the willingness to reject conventional approaches that Trump displayed with someone who offers a level of wisdom, strategic thought, and basic competence that Trump didn’t. There is, of course, no way to know if a President Biden would be that person, but the vision he has sketched to this point seems to be embracing the traditional. Still, I suspect that most of the world would prefer a conventional stalemate to another round of tweets about the size of each nation’s nuclear button.