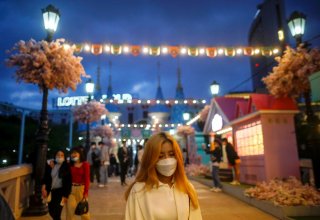 Daily coronavirus cases in South Korea have fallen below the five thousand mark for the first time in twenty days as the government continues its push to contain the new and highly mutated Omicron variant.

As for the concerning new Omicron variant, the country reported sixty-nine new cases, which raised the total to four hundred forty-five.

In addition, the number of critically ill COVID-19 patients ticked lower to one thousand seventy-eight from one thousand one hundred five on Saturday. There were also fifty-five more deaths, bringing the total to five thousand three hundred over the course of the nearly two-year-long pandemic.

Meanwhile, Yonhap News Agency has reported that COVID-19 cluster infections have been continuing to rise at children’s educational facilities in Seoul, the city government noted on Monday.

Officials have confirmed that as many as two hundred seventy children tested positive for the virus last week alone that were linked to infection clusters traced to daycare centers, kindergartens, and other educational facilities.

In an effort to curb the rising number of Omicron cases and cluster infections, South Korea’s Food and Drug Ministry decided Monday to issue emergency authorization for Paxlovid, Pfizer’s oral pill for COVID-19, which could be available to the public as soon as late January. The government has secured enough doses for about six hundred thousand individuals and noted that it is seeking to obtain more.

“As the number of COVID-19 patients and those in serious condition has been increasing, we comprehensively considered the need to introduce pills that patients can take themselves, the examination review of safety and effectiveness of the drug and the results of an expert committee meeting,” Kim Kang-lip, head of the Ministry of Food and Drug Safety, said during a press briefing on Monday, per The Korea Herald.

Minister of Health and Welfare Kwon Deok-cheol added during the briefing that “the clinical demonstrations show that Pfizer’s oral drug shows a 90 percent prevention rate in hospitalization and death of COVID-19 patients.”

Per The Korea Times, Chon Eun-mi, a respiratory disease specialist at Ewha Womans University Mokdong Hospital, saw the pills as another positive step forward in the long battle against the pandemic.

“Considering its high efficacy shown during clinical trials, ease of shipment, storage, and administration, if used with the right strategy, the oral pills will much help the country tackle the COVID-19 crisis,” she said.