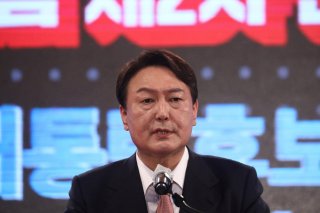 In October, South Korea’s ruling Democratic Party nominated Lee Jae Myung, the governor of Gyeonggi Province, as its candidate for the upcoming presidential election in March. Lee faced a competitive primary, particularly against Lee Nak Yon, the former prime minister of the Moon Jae-in government. Despite relatively weaker institutional support within the ruling party; criticisms from political opponents for his advocacy of universal basic income; and controversies over allegations surrounding his records as a mayor of Seong Nam city; Lee Jae Myung won the party nomination with 50.3% of the vote, avoiding the need for a run-off.

This week, South Korea’s main opposition party, the People’s Power Party, nominated Yoon Seok Yeol, the former prosecutor-general under Moon’s government, as its presidential candidate. Despite his political inexperience and past records as a prosecutor who investigated two former presidents from the opposition party (Park Gun Hye and Lee Myung Bak), as well as several verbal gaffes that caused his support to fall among younger voters, Yoon won the nomination with 47.9% of the votes, surpassing his nearest rival Hong Jun Pyo’s 41.5%.

As two main contenders for South Korea’s presidential election, campaigns of Lee Jae Myung and Yoon Seok Yeol present foreign policy platforms that overlap somewhat but also contrast with each other in their broad policy orientations.

On North Korea policy, Lee’s campaign has been pledging to largely continue Moon’s foreign policy of playing the “driver’s role” in mediating between North Korea and the United States. Lee has also expressed support for Moon’s diplomatic efforts in its final year to achieve the “Declaration to End the Korean War” as an “entrance” to renewing the peace process for the Korean Peninsula.

On denuclearization, Lee has pledged to personally meet with U.S. president Joe Biden and North Korean leader Kim Jung Un to attain support for an “incremental, reciprocity-based” denuclearization framework. The framework would focus on achieving a series of “small deals” that would include conditional lifting of sanctions on North Korea in return for the latter’s reciprocal denuclearization measures.

Lee, however, has also pledged snapback sanctions to counter the Democratic People’s Republic of Korea (DPRK’s) backsliding in the agreement and declared Inter-Korean economic cooperation projects, such as the reopening of Kaeson Industrial Complex, should be based on mutual benefits of two Koreas. Lee pledged to confront North Korea’s wrongful behaviors and practices to demand improvements, rejecting the perception that his engagement policy would be one-sidedly favoring North Korea.

Yoon Seok Yeol’s campaign also supports continued diplomatic talks with North Korea and has proposed the establishment of a trilateral liaison office in the Panmunjom, located in the demilitarized zone between the two Koreas. During the primary debates, Yoon has affirmed his willingness to meet with Kim Jung Un as a negotiation partner. Yoon’s campaign has also supported sending humanitarian aid without condition to North Korea, which is separate from the denuclearization talks.

In contrast to Lee’s campaign, Yoon’s campaign does not view South Korea’s role as a mediator between North Korea and the United States. Rather, Yoon portrays South Korea as a stakeholder that should closely collaborate with neighboring countries to achieve denuclearization. To achieve this objective, Yoon’s campaign has proposed closer collaboration with the United States in maintaining sanctions on North Korea, postponing inter-Korean economic cooperation until prior progress in denuclearization. To maintain nuclear balance with North Korea, Yoon has advocated bolstering the credibility of the U.S. nuclear umbrella over the Korean Peninsula through regular exercises of nuclear weapon exchanges, creating a protocol for emergency deployment of U.S. nuclear assets into South Korea. Yoon has also opposed the declaration to end the Korean War as premature without the first achievement of denuclearization.

Concerning U.S.-China tensions, Lee’s campaign has affirmed support for the U.S.-Republic of Korea (ROK) alliance. At the same time, Lee cautioned South Korea should not constrain its maneuverability by siding with one regional power over the other. Describing the United States as “Korea’s only ally” and China as a “strategic partner,” Lee favors balanced diplomacy that would encourage both China and the United States to cooperate with South Korea. In the past, Lee has favored removing the U.S.-operated missile defense system THADD from South Korea, as it has caused criticisms from China, but has so far been equivocal on this issue in the presidential campaign.

While Yoon’s campaign has also supported continued economic engagement with China, the greater emphasis had been on closer strategic alignment with the United States. Yoon has supported the maintenance of THADD within South Korea. He has also pledged to join the U.S.-led Quad’s working group and to eventually consider full membership.

On Korea-Japan relations, Yoon’s campaign has also pledged to take an “assertive stance” on issues related to territory, past history. However, Yoon’s campaign also described Japan as a neighbor who shares values of “liberal democracy and free-market” and proposed establishing a bilateral partnership based upon the framework of the 1998 Dae Jung Kim-Obuchi Keizō Declaration, a statement from the summit of the two former leaders of Korea and Japan, which affirmed future-oriented bilateral cooperation along with a common understanding of the past history.

With four months to go until the general election, the two campaigns will continue to refine and expand their foreign policy platforms. It is also probable that foreign policy issues would play a secondary role to hot-button domestic policy issues such as housing price and youth employment and scandal allegations surrounding both presidential candidates.

Nonetheless, it is in the strategic interests of South Korea’s neighbors to observe which foreign policy direction the next Korea’s president would likely take for the next five years. While foreign policies of regional neighbors (China, Russia, Japan, and North Korea) have largely been stable due to continuity in their governments, South Korea’s foreign policy has the potential to readjust its strategic direction, depending on the outcome of the presidential election.

Jong Eun Lee is a Ph.D. Candidate and is also an adjunct faculty at the American University School of International Service. Prior to this, he has served as a South Korean Airforce intelligence officer. His research specialty includes U.S. foreign policy, South Korean politics and foreign policy, alliance management, East Asian regional security. He has recently published an article “What the Next South Korean President Can Learn From Moon’s Diplomatic Challenge” in the Diplomat and “Afghanistan’s Collapse Is a Rude Awakening for South Korea” in the National Interest.