South Korea and America Do Not Share the Same Interests 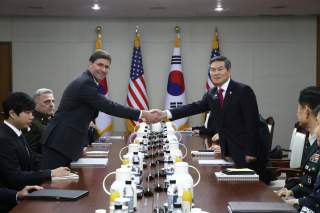 Key point: It is unclear how well Seoul and Washington can work together in the future if they keep diverging.

The United States has 28,500 troops in South Korea, a legacy of the Korean War and a deterrent to North Korea. The costs of that deployment are shared by both the US and the ROK, with Seoul carrying close to $1 billion annually, roughly 40 percent of the total cost. But Donald Trump wants South Korea to pay more. Specifically, 400 percent more. That’s unlikely to happen.

While policymakers and defense experts generally agree that South Korea can and should shoulder more of the burden, Seoul reacted with anger to the $5 billion ask US Defense Secretary Mark Esper relayed during a surly meeting earlier this week. Not only that, but the same day talks dissolved with the US, South Korea signed a defense agreement with China. A $5 billion request is certainly a shock to the system, but the larger issue is that increasingly, South Koreans don’t believe their interests align with those of the US.

This week, they took to the streets to protest US demands. Some argue that Washington is using South Korea as part of its plan to contain China. The notion seems bizarre after nearly seven decades of American commitment to peace and security in the South. But for many South Koreans, even the threat of the North is not enough of a convincing justification when it comes to the US-ROK alliance. President Moon Jae-in has placed peace and inter-Korea relations at the forefront of his North Korea policy, at times putting South Korea at odds with the US and Japan, who favor sanctions and pressure over engagement. Moon Chung-in, a close senior adviser of President Moon, expressed frustration that South Korea had “sacrificed” North-South Korea relations in favor of the US-South Korea alliance, concluding that the US position on these matters has been “harmful.”

Also clouding the whole burden-sharing debacle is the ROK’s decision to withdraw from the General Security of Military Information Agreement (GSOMIA) — a pivotal 2016 intelligence-sharing pact that allowed Japan and South Korea to exchange intel about North Korea. After a nasty trade fight earlier this year between Tokyo and Seoul, Moon concluded that extending the agreement was not in South Korea’s national interest. In response, USIS Chairman of the Joint Chiefs of Staff Gen. Mark Milley explained that dissolution of the pact served only China and North Korea.  (Update: Since the time of publication, Seoul has made a surprise, last-minute decision to conditionally extend GSOMIA with Japan.)

With deadlines for both GSOMIA and the cost sharing agreements fast approaching, there is a glimmer hope. While the Moon government seems keen to end the US-ROK partnership era, he may have less support than he thinks. Public support for GSOMIA is on the rise — currently 55 percent of South Koreans are in favor of keeping the pact, while only 33 percent oppose. And apparently the South Korean public doesn’t fully share its government’s delusions about its Northern neighbor either. A Gallup Korea poll from October shows that most South Koreans believe that North Korea will neither give up its nuclear weapons, nor abide by agreements from past summits.

In short, all is not lost. First, the United States needs its Asian allies because of the threat of a rising China and an uncontained North Korea. Second, Moon notwithstanding, the South needs the United States; it’s clear the ROK military is far from up to the challenge the North poses. Finally, at the end of the day, if both sides come to their senses, there’s a deal to be had. It won’t be $4 billion more, but it may well be additional Korean support for what amounts to a vital insurance policy for South Korean democracy and prosperity.